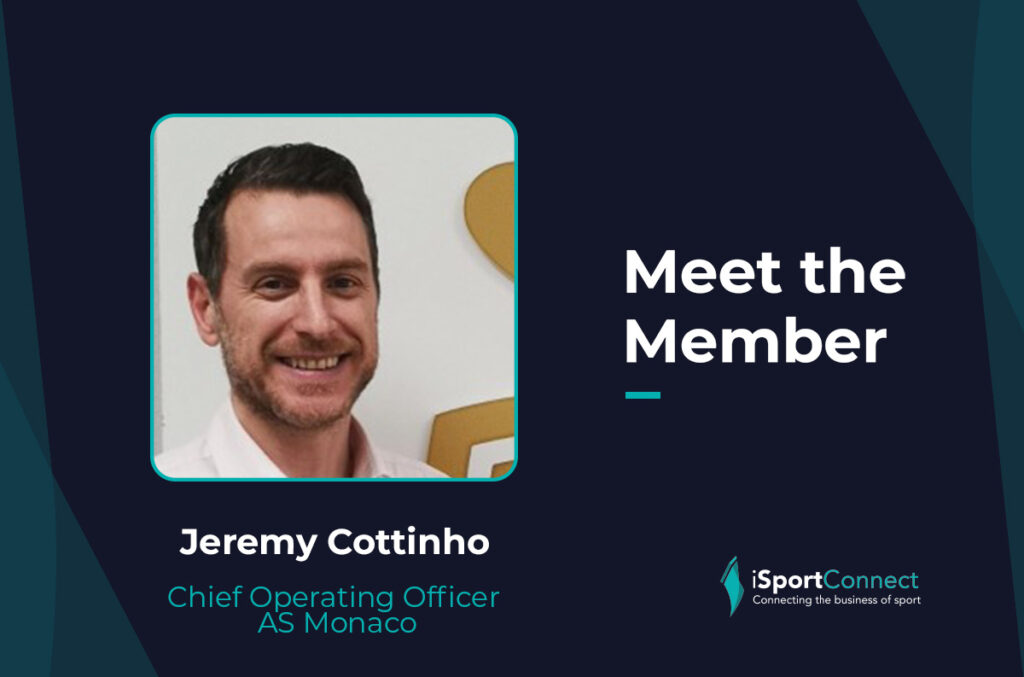 AS Monaco Interview Meet The Member

Meet the Member: “What I have learnt since being at the club is to be better on the pitch, everything behind the scenes has to be in place”

Jeremy Cottinho has been at AS Monaco since 2020 and is five months into his role as Chief Operating Officer. He took some time to speak to our Content Manager Alex Brinton about their new Performance Centre, the challenges they are facing as a club post-pandemic and the weather.

The reason why I decided to come to AS Monaco is because of the image of the club and the strong heritage that the club has. Also, something that goes back to my childhood is the jersey, with the diagonal, it’s something that is very easily identifiable. My brother actually had one of the jerseys when we were younger.

We have produced five World Cup winners from this club, the most recent one being Kylian Mbappe.

Lastly, of course we have an international brand. Last week I was at the ECA General Assembly, in Istanbul and everyone knows AS Monaco. We also have 22 million followers on social media, that is a massive worldwide database.

On top of that, it is nice to be by the sea and have sun 11 months of the year!

What are the particular challenges you face at AS Monaco as a business at the moment?

Covid was particularly hard in France and that is why I moved from a project-based position and into a strategy one. We needed to refine the way we worked as a football club.

A lot of the work we are doing at the moment is trying to build communities. We have the physical community which are the people that attend the games or the side events we put on around matches – for example, last season before the match against PSG we had an event on a boat out in Monaco harbour.

We are also putting a lot of work into our digital community. We want to evolve and grow our 22 million followers and to do that we need to make sure that we are providing them with interesting and engaging content.

The main challenge we are facing though is having to change our financial model. When the Mediapro TV deal collapsed in 2020, Ligue 1 clubs lost a lot of money in that. Amazon stepped in and bought the rights for less than what was expected. So at the moment, we as a club are trying to build the most sustainable model to run a football club by, I think a lot of clubs around Europe are facing the same problems.

A lot of clubs are moving towards digital tickets and there has been a lot of evolution in the ticketing space in the last few years, is that something you have looked at?

We haven’t done this yet but ticketing is definitely an area we are looking at. A very high percentage of our tickets are actually sold at the stadium in person rather than online like most clubs would have.

We are trying to work on a really exciting project with the government in Monaco which would enable us to integrate the ticketing into a digital wallet people use in Monaco to pay for the bus and pay for everything really.

We are also looking a bit further into the future and thinking about how we can use Web3 and NFTs. The user case we have to think about a lot is a season ticket holder who can’t attend a game, so wants to give his friend or brother his ticket. How can we make that work?

But it is definitely something we are looking at.

You have just finished the completion of a stunning new training base, how do you think that will help the club moving forward?

It is an amazing place, you should come and visit. It was a mission from our President from the day he came in. It is a big investment (app. 55M€) but it is in line with our sporting strategy, which is driven by performance and innovation.

What I have learnt since being at the club is to be better on the pitch, everything behind the scenes has to be in place. As a club we believe in marginal gains and the new Performance Centre allows us to work on this part.

It also makes the club a more attractive proposition for new signings because they now have a state of the art Performance Centre where they can train and develop as players.

How have things changed since the pandemic?

The biggest impact, we have already spoken about, that came from the TV deal falling apart. Clubs had a big part of their revenue tied up in TV rights so it can’t be overstated the effect this had on clubs. We obviously also lost money from the restriction on people attending games and this is a massive part of why we are going back to the drawing board with our business model for the club.

How important is your CRM system in making sure that you’re keeping a good relationship with your fans and 22 million followers?

This is super interesting because we have fans around the world. We found we got a big following in Japan, so we made channels and produced content in Japanese in order to keep that good relationship with them.

We actually had a meeting a couple of days ago with one of our partners called Casino Secret, they really understand the CRM industry. What we want to do is try and learn from our partners because their expertise can really help us.

We actually have two sets of CRM data one for B2B and one for B2C because obviously those relationships are going to be very different.

Building and retaining a relationship with those 22 million fans is so important for us because 22 million people are never going to be able to come to a game.

Web3 seems to be the hot topic in sport at the moment, you are working with Socios and Capital Block, what do you think the role Web3 plays in the future of sports?

Web3 is definitely part of our innovation culture – which is very important to us. We definitely think Web3 has a place in our future.

It is also another way we can engage with those global fans who might not be able to attend our matches. They may not be able to come to a game, but they could still buy an NFT. This is one of the ways we see it working well for us and that is why we are working with Capital Block.

In terms of the metaverse, I definitely think that it has a lot of potential, but we are still working out our strategy in terms of that.

We are looking a lot into how we can develop a virtual museum – which would be a really exciting metaverse project, but we are in the early stages with this.

Like I said, Web3 is part of our future, it is where we want to be as a brand, business and a football club.

We have a global strategy, and it plays a big role in deciding who we decide to partner with. We also can’t partner with a company that does not share the same values as us.

For example with eToro they are a big brand, an international brand. Since the arrival of eToro, we have been able to grow the partnership each season, which is positive and that shows we are both well aligned.

We also realise it is important to be giving back to our partners, so that there is value going both ways.

For example, with the betting partnership we have with Casino Secret, there’s obviously lots of betting companies we could partner with but it was about partnering with the one that fit our values best, the one that we share a cross-learning type of approach as well and respected where we are trying to get to as a business and as a club.

Why was it important for you to be a speaker at the African Football Business Summit?

I met Brian Wesaala a long time ago when I was at UEFA and he told me his plans to start a football foundation for Africa. I thought it was a brilliant idea and what he has created is incredible.

I think it is important to support and try and work with the football community as a whole, but also I always pick up a couple of things when I attend these events.

One of the best thing about football as a business is that you can go up to people who are your competitors on the pitch and have an honest and open conversation about what challenges we both face and how we are tackling them.

AS Monaco Interview Meet The Member