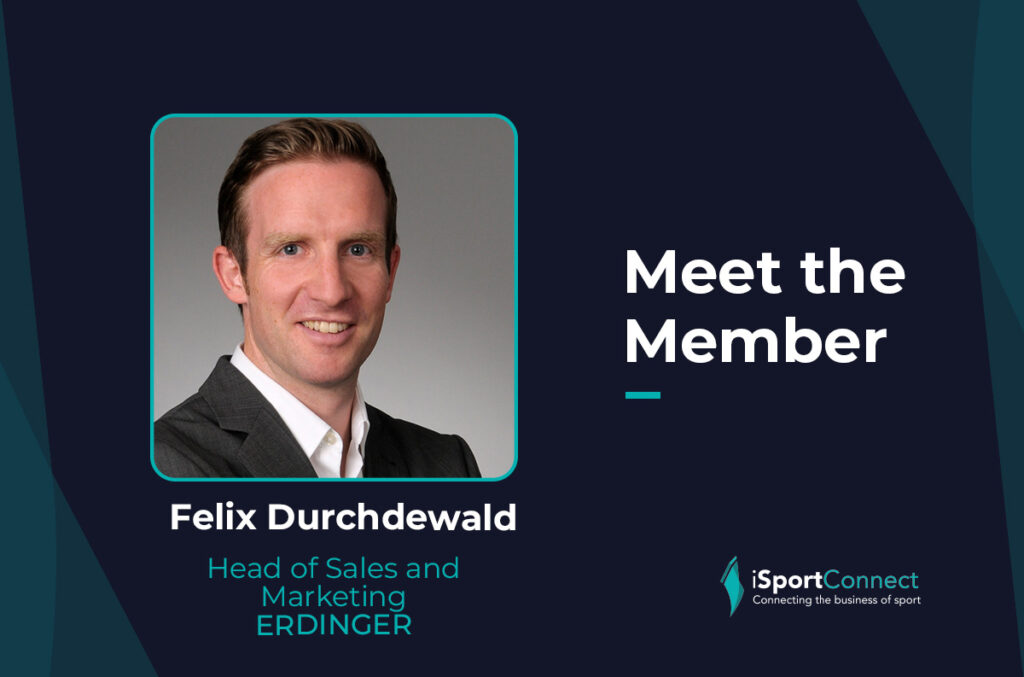 Before Christmas, The Anfield Wrap launched their five-part documentary series that has been described as a love letter to Jurgen Klopp. German beer ERDINGER is the main partner of the project and iSportConnect’s Content Manager, Alex Brinton, sat down with their Head of Sales and Marketing, Felix Durchdewald, to speak about it and the direction ERDINGER is going as a business.

You have been at ERDINGER for nearly eight years. How has the business changed in that time?

It has changed quite a lot. Our biggest market is here in Germany where beer consumption in general is in decline. So, we have had to evolve and change as a business to match that market. Three or four years ago we introduced two new products which were the ERDINGER Alkoholfrei mixed products and that was a really big step for us as a business.

Our owners were very cautious about doing this because they didn’t want to do anything that would have an impact on the taste of the beer – for them that is always the most important thing. We managed to use a lot of market research to persuade them it was a good idea and we now have two different flavours: lemon and grapefruit.

We also had to look outside of the country for sales and did a lot of research on countries where wheat beer is popular, and we are now one of the top five exporters of beer in Germany.

Tell us about your time at ERDINGER, you have moved up the ranks, what has that journey been like?

It is a cool story really. I used to work for Adidas eyewear in Stuttgart but then I moved to Munich and had to find another job. As I am sure we will get onto later, ERDINGER does a lot of work in sport so that’s how I started here. I started off as a marketing manager, but I have been the Head of Sales Marketing since the summer of 2018.

ERDINGER has got a great history, what is it like working for such an established brand?

It is definitely an advantage because everyone knows the brand, knows the beer and knows what we stand for as a company. But it also poses one of the biggest challenges because we need to evolve and appeal to new audiences all the time in order to grow and that is hard when people already have a clear view of what your product is.

We must have a good handle on who the people drinking our beer are, here in Germany it is predominantly people over the age of 50 and we need to expand into younger markets because that just isn’t sustainable. But it is hard to change with such an established brand. We are hoping that the new products we are introducing will introduce our beers to younger drinkers and we have already seen an increase in the number of younger, more affluent, people starting to drink ERDINGER because they are tired of the lagers that are available, which is encouraging.

In terms of partnerships, you have Jürgen Klopp as a brand ambassador. What was the thinking behind that?

We have always had big brand ambassadors, before Jürgen we had Franz Beckenbauer, and we prefer to go for individuals that fit with our brand rather than going after big clubs. Jürgen is such a down-to-earth, uncomplicated guy and he is actually from a brewing family as well as sharing a lot of the same values with us as a business and the ERDINGER Weissbier brand. Those shared values are where the relationship started and it took a few years until we got him, but it is perfect – we actually call it the perfect match.

You’ve chosen to partner with The Anfield Wrap, and support them with their documentary on Klopp, why did you choose to support this project?

To start with our activities were obviously very Merseyside and Liverpool focused and through that we became aware of The Anfield Wrap and the work they were doing. It is a great way for us to raise our profile because the people we want to connect with are the fans, so we need to start at that level and work on something that appeals to them, and this documentary is definitely something that does that.

When they came to us with the finished documentary, we didn’t hesitate in partnering with them because what they have made is such a high-class product that celebrates Jürgen in a real way. It is almost a letter of love from The Anfield Wrap to Jürgen and that is what makes it so special.

They have been fantastic as well and we have got a great relationship with them. We are always texting about football, it is so nice to have such a strong relationship with our partners. There are obviously financial parts of the deal but this partnership is a lot more than that, they really wanted to partner with people who understood them and what they were trying to achieve with the documentary, and we have been fortunate enough to be that company.

What surprised you about the documentary when you watched it for the first time?

It sounds insulting to them, but the detail and quality of the documentary is so high. We knew they were capable of it but actually seeing the final cut was mind blowing. The detail and the quality of the people they interview make it so interesting and compelling. Like I said before it is a love letter to Jurgen and for anyone who wants to know more about him this is the best documentary on it I have seen. It is also made by the fans for the fans, so it doesn’t have a commercial message behind it at all.

A lot of alcohol brands spend a lot of money on partnerships with sports teams and leagues. Carlsberg had a front of shirt sponsorship with Liverpool for years. Is this something you are looking at more as a business?

It isn’t something we are actively looking at to be honest, the amount of money needed for a front of shirt sponsorship is something that is completely out of our price range. We have to be clever with the sort of partnerships we do and The Anfield Wrap partnership is a prime example of that.

We try to be creative, but we are constantly reviewing our strategies and if the opportunity did arise to do a front of shirt sponsorship or if a similar project that matches our brand values is identified then it is definitely something we would take a look at.

Is the UK one of your key targets at the moment, where else in the world are you looking at going into?

Yes, the UK is a top focus for us and has been our biggest export market for a few years now. That is why we are putting the amount of time and resources into it that we are. We export to over 100 countries in total, our other big ones are Switzerland and Asia. We do export to the US as well, which is a market that is growing really nicely for us at the moment and presents us with some interesting opportunities.

We want to keep pushing in the UK though, our clear goal is to become the biggest wheat beer in the UK within the next couple of years.

We were actually the first brewery to move into the market and as a result we were able to shape the market as best we could. If I do say so myself, our brewers were the first to make alcohol-free beer taste just the same as normal beer and that was a massive boost for us and probably a big reason why it proved to be so popular.

The fact that there are isotonic benefits to ERDINGER Alkoholfrei actually made it a ‘sports recovery drink’ and this was – and still is – a massive part of our marketing around the beer. The fact you could have a beer after finishing a marathon and it actually helps your recovery by replacing lost fluids and vitamins is such a fun idea and that is how we got into our work with mass participation events.

The industry has definitely evolved since we started, especially with Generation Y, they are so health conscious as a generation, so we have to make sure that we keep the number of calories to a minimum. Also we have seen a lot of our competitors taking a lot of inspiration from our product which is quite rewarding because it shows we are doing something that works and that we are shaping the market.

As we touched on a second ago, ERDINGER does a lot of work with mass participation events, tell us a bit about those partnerships?

We started off by approaching the organisers and we pitched the idea that at the end of the race everyone gets a free ERDINGER Alkoholfrei instead of sugar loaded soft drinks. They were a bit reluctant at first but we explained that the beer had isotonic benefits and they were more interested. It quickly became a big success and now different events come to us rather than us going to them.

For us it is a great way to get more people tasting and sampling our product. When I finished my first Triathlon about ten years ago, they handed me a half litre of ERDINGER Alkoholfrei and I was a bit confused but when I had it, the taste was really good but it is also fun because it helps reduce tiredness and promote normal energy metabolism so is the perfect sporty thirst quencher.

Drinking habits are changing with Gen Z, what changes have you noticed and how have you adapted to those changes?

They are drinking less for a start, that is the first major change and they really want to challenge and change the industry into creating new options. Their drinking portfolio as I call it is a lot wider than it has ever been and they have a lot less brand loyalty than before.

But for sure we need to be really innovative and make sure that we listen to what they are telling us and react. That can be hard to predict so it is tricky but whatever the next innovation is, we will always make sure ERDINGER beers are brewed to provide the highest quality possible.

Meet the Member: “Sports clubs don’t choose what is interesting for fans,…

Changing The Game: “Getting people through the gate is obviously a major…