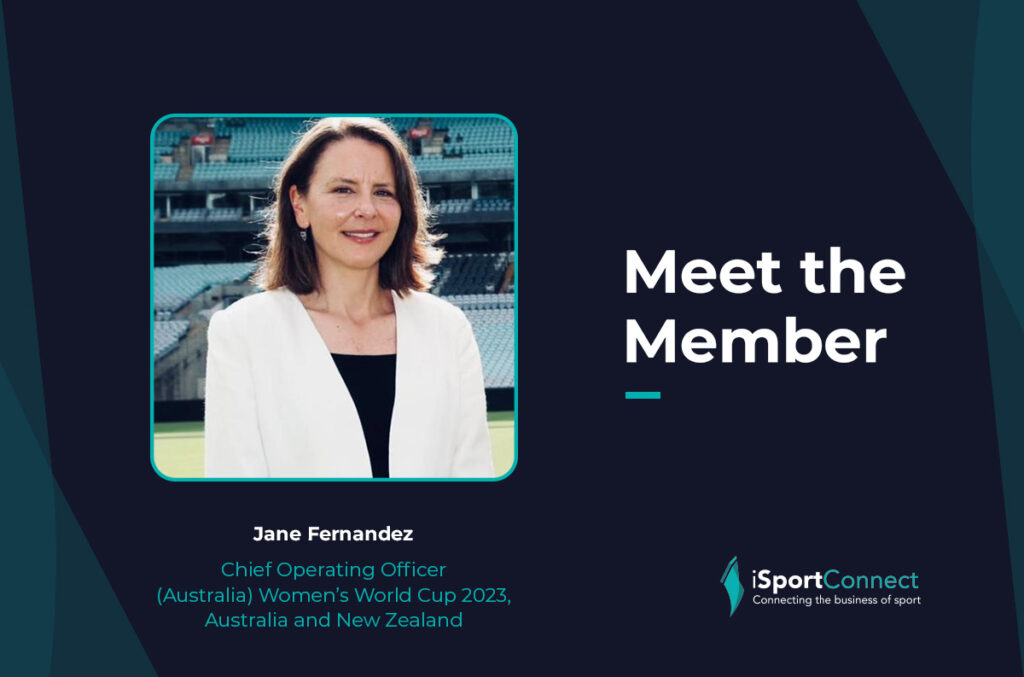 Jane Fernandez is the COO (Australia) of the FIFA Women’s World Cup Australia & New Zealand 2023. She spoke to iSportConnect’s Content Manager Alex Brinton from Sydney, just after the conclusion of the Women’s European Championships here in England.

When was the idea of hosting the tournament first come about and how did that process play out?

A number of years ago Football Australia always had hosting these major football events as part of their strategy. The Women’s World Cup was one of those.

And when I was working on the AFC Asian Cup, with my colleague, Mark Falvo, who’s the COO of Football Australia, we entertained the idea of bidding for the 2019 tournament.

We just weren’t ready. It wasn’t the right time. And they say timing is everything. And thankfully, we went forward and bid for 2023, and here we are today.

Both Australia and New Zealand are sports-mad countries. But football isn’t traditionally one of the biggest. How big is the fan base going to be for this tournament?

In Australia, football is the largest participation-based sport. There are over 2 million participants in our game here. And as you say, Australians and Kiwis are sports mad, we love going to major sporting events. We have a strong supporter base of those that are very proud of their countries, and really love watching international sport.

The other thing that we have here is that we’re both very multicultural. Over 300 languages are spoken, over 200 nationalities represented. And we saw during the Asian Cup that matches like Iraq v Iran can sell out stadiums.

It was just so, so exciting. It’s a true reflection of the multicultural nature of Australia and New Zealand as well. The supporter base will be huge, every person will have a second team and maybe even a third team. We’re confident of seeing all of the fans in the stands, singing in full voice and supporting every team, all 32 teams that are going to participate in this competition.

There are big challenges around two nations hosting a tournament – as opposed to one – how have you dealt with that?

It is going to be a tournament of firsts. The first time a FIFA Women’s World Cup will be held in the Asia Pacific region, the first time in the southern hemisphere and the first time it will have 32 teams, the best footballers in the world coming from 32 countries.

That brings with it the opportunity to increase participation, to really excite more girls and boys to lead active healthy lives, to put on their football boots, have a kick, and to really enjoy the game that we all love.

What exciting things can the fans expect when they attend games?

This FIFA Women’s World Cup will be the biggest event we’ve hosted in Australia since the Sydney 2000 Olympic Games. This is going to be an absolute moment in time and people will have memories for a lifetime.

You know, I can see people saying ‘Where were you on the 20th of August 2023? When that winning goal was scored at Stadium Australia in the final of the FIFA Women’s World Cup.’

We will see the best footballers in the world taking centre stage, but it will also be a connection between sport, art, music and culture. We’re going to bring our cities to life through the FIFA fan festivals. So, fans can really taste football outside of the stadiums as well. This will be a huge community celebration and using football as the platform, as the tool to bring people together.

After the Euros, everyone is calling it a turning point, not just for women’s football, but for women’s sport. Have you got the same impression on the other side of the world?

We’ve been watching here and soaking it up, taking it all in, what an unbelievable tournament. I think women’s sport in Australia and New Zealand has really seen this growth, this momentum for a number of years now. I was lucky enough to be at the 2020 Women’s T20 World Cup final at the MCG. I remember sitting in the stands and really feeling then that this is an absolute turning point in women’s sport and in women’s major sporting events.

We’ve seen that growth across all sports, and specifically in football. We know that the Matildas are now such a household name, such a strong brand, attractingthousands of fans to games.

It does take time. But absolutely the momentum is 100 per cent behind it.

Is it the perfect time to be hosting a Women’s World Cup?

I believe this is absolutely the perfect time. As I said, you can see this growth is on an upwards trajectory. We’ve just seen 50,000 people attend the Morocco v South Africa match at the Africa Cup of Nations. This is the moment I think, and I really do believe that in the winter months next year, we’re going to see that this tournament will capture hearts and minds. It is going to take people to this next level of understanding and appreciation. It’s going to inspire, it’s going to entertain, and it’s going to be the hottest ticket in town.

A lot of brands have thrown their support behind women’s football at the moment. How much of a boost is that?

Investing in the game is absolutely critical for its success. It’s critical for its commercial sustainability. We know greater investment leads to a better product and a better outcome. For the first time FIFA has actually implemented a standalone commercial pillar for the women’s game. It’s fantastic that we’ve now got Visa onboard, we’ve got Xero onboard. And there’s more to come.

If lots of money does find its way into the women’s games, and it’s starting to, is that only a good thing?

I believe so. I believe it’s a great thing that smart investors got on board from the very beginning when this growth started. And you know, there are a lot more investors out there now who know that this is a great product. This is something that we want to be part of now. But they shouldn’t wait. They should get onside now, and really ride that momentum with us.

Both countries are in the fortunate position of having a large amount of sporting infrastructure in place already and you’ll be utilising some of each country’s biggest stadiums. How much of a statement is it that you’re going to use in places like Stadium Australia and the Cake Tin in Wellington?

They’re the most prestigious, the biggest venues. And they’re the venues that have held Olympic Games and amazing tournaments for other sports as well. I believe it is an absolute sign of the importance and the level at which we will be delivering the FIFA Women’s World Cup at.

I can’t wait to be there in the stands at the final at Stadium Australia with a full house. But I think it is a really important message that the competition will kick off here in Sydney on July 20 at our brand-new Sydney Football Stadium. It places the FIFA Women’s World Cup at the top of major sporting events, which is exactly where it should be.

The women’s T20 World Cup was hosted in Australia just before the pandemic it was a huge success for the crowd over 80,000 attending the final. So, there’s obviously great interest in women’s sport in the country. What does success look like for you from this tournament?

Our aim is always to continue doing better to take this tournament Beyond Greatness. We know in France, there were 1.1 million attendees, we want to take that to 1.5 million, we know the broadcast was over a billion, we want to continue to grow that let’s get to 1.2 billion.

I think ensuring that there is continual growth, continual investment in the FIFA Women’s World Cup, to make sure that we can take it to the next level. I think that’s what this is all about. It’s also about ensuring that the legacy outcomes are achieved through hosting the tournament. You know, the data, the numbers that are critical around viewership, and attendees, but also, the social and economic benefits are really critical as well.

What can the legacy of this tournament be both in the host countries and around the world?

Well, globally, FIFA are investing over $1 billion dollars into the investing in women’s football and the growth of women’s football. We have a target of 60 million women and girls playing football by 2026. So from a participation base, we want to absolutely continue to grow that right across the globe. We also want to make sure that we’re investing in the development of female leaders in football.

Football Australia and New Zealand Football are bringing their legacy plans to life. They are really focused on participation growth, with the target of getting to 50:50 by 2027.

The investment in facilities is another really important legacy outcome, and will have a real impact from hosting the tournament.

There’s the leadership pillar ensuring domestically, female leaders are developed to continue to be working in and leading the game. We want football to be the sport of choice for women and girls both on and off the pitch. So developing female leaders, coaches, referees, administrators is really, really critical.

Obviously, there’s a high-performance pillar. We want to keep investing in the development of the game. And then there is no better way to remind the world that Australia and New Zealand are open for business. So ensuring that from a tourism perspective and an International Relations perspective, we are front and centre and that is the power of football. That is the power of the global game.

It opens doors internationally. It’s a sport that the world plays and the opportunities are just endless.