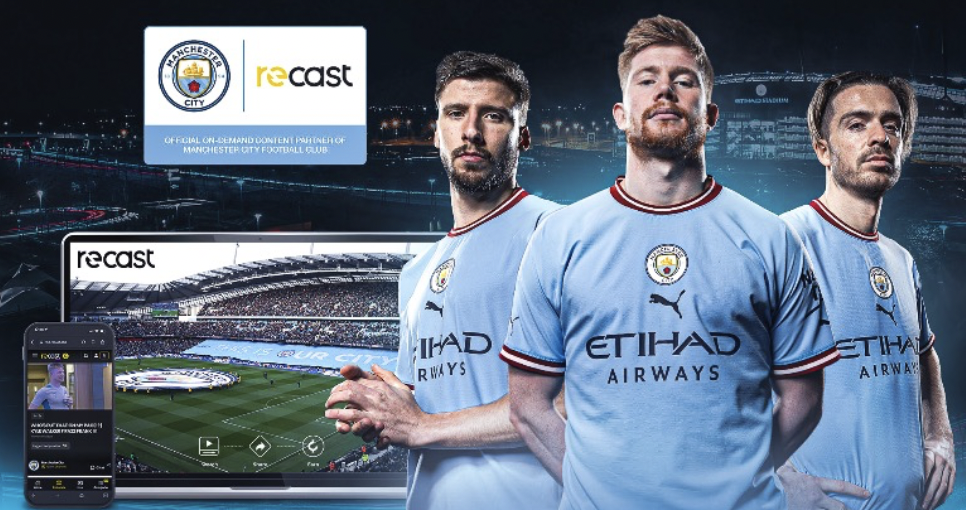 Manchester City has today announced the official launch of its Recast Channel, as part of its continued direct-to-fans content offering for followers around the globe.

As part of the new agreement, City’s pre-season US Tour fixture against Bayern Munich on Saturday was made available for fans on the channel. Manchester City’s new documentary series, ‘Together: Champions Again!’ – will also be co-premiered across the club’s Recast Channel and City+ platform when released at 6pm this evening.

The next fixture available on the Recast channel for Cityzens to enjoy will be the club’s charity friendly fixture against Barcelona on Wednesday 24th August.

Through this affordable on-demand platform the club is able to offer fans an alternative option for watching content, with Recast complementing the existing City+ subscription service.

The fixtures are among the upcoming content highlights on the Man City Recast Channel which has been fully launched following a successful trial of the streaming platform last season.

The platform will also provide great access to Gareth’s Taylor’s Manchester City Women’s side – as well as the chance to keep tabs on the club’s emerging talent with U18 and U23 content shown on the channel each season.

Other highlights on the platform will also include behind-the-scenes action including training ground clips, player and legend interviews, in addition to the full back catalogue of City+ documentaries, match action from across the years, Best of Series and Man City Esports content.

Gavin Johnson, Media Director at City Football Group, said: “The launch of the Man City Recast Channel is another exciting development in the club’s ongoing digital and content offering for our millions of fans around the globe. Complementing our existing City+ offering, the new Recast Channelwill allow fans the flexibility and choice to watch and engage with content as and when they please.

“We were delighted to be able to show one of our preseason tour fixtures against Bayern Munich in Green Bay live on the platform and look forward to showing our new documentary series ‘Together: Champions Again!’ and the club’s friendly against Barcelona next month. We hope fans around the world access and enjoy, with plenty more content available over the coming months.”

Andy Meikle, Founder and CEO of Recast, said: “Man City has grasped this opportunity to fully unlock their digital revenue potential, a forward-thinking decision that will deliver for the club and the fans. As one of the biggest clubs in football, this is a huge endorsement for the platform. The club’s Recast Channel will complement City’s existing subscription OTT platform giving fans greater choice and control as to how they watch content, either by monthly subscription on City+ or by paying-per-view on Recast.”