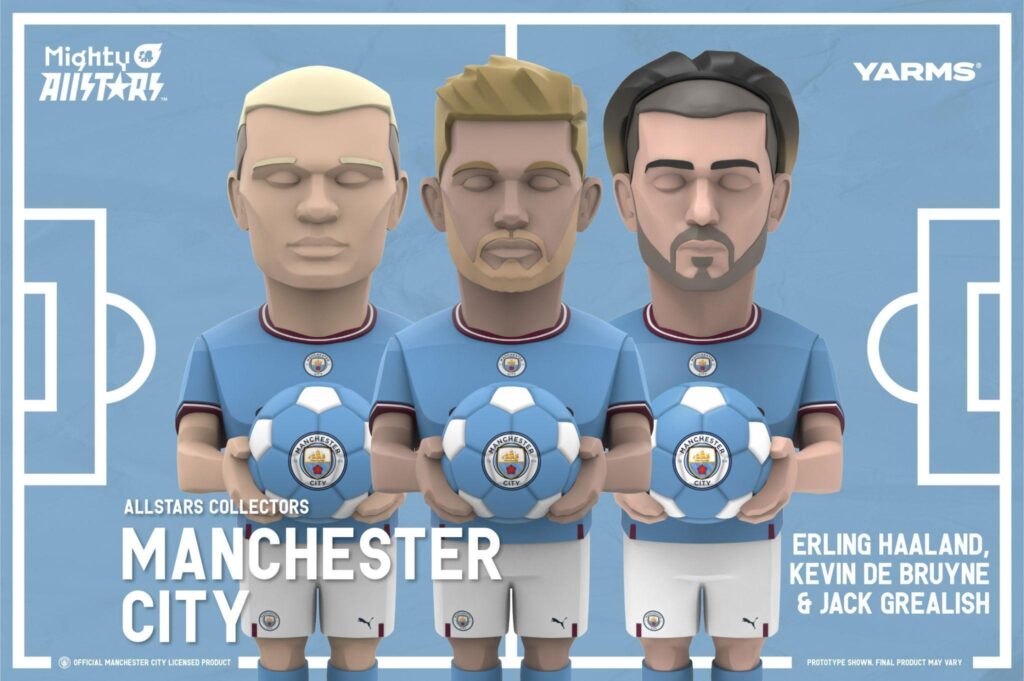 Mighty Jaxx is committed to working with the biggest names in world football and beginning this collaboration with Manchester City, the most successful team in the English Premier League for the past decade, is testament to its continued ambition. Off the back of another league title Manchester City has established itself as one of the biggest clubs in world football and these collectibles pay homage to some of the players that have elevated them to this stage. This season’s star signing Erling Haaland has already demonstrated what a prolific goalscorer he is and his athleticism, speed and finishing are the standout traits that make him one of the world’s most desired and feared no. 9s.

Already considered a City legend by fans, Kevin De Bruyne is the epitome of a complete midfielder and was a key member of Manchester City’s historic 100-point season. A winner of numerous player/team of the season awards, De Bruyne is considered as one the greatest of his generation and has played key roles in each of City’s title wins in recent memory. Jack Grealish has been dazzling fans for some time and, now in his second season at Manchester City, is demonstrating the skills that make him a world beater and showing why so many English fans place the weight of the World Cup on his shoulders.

Mighty Jaxx’s license with Manchester City is the latest in a number of agreements with massive sports brands including top tier German team Borussia Dortmund, Formula 1 and the NBA. Collaborations with these internationally recognised brands continue to define Mighty Jaxx in the collectibles space as a producer of iconic designs that entertain and inspire existing and new fans alike. Already shipping millions of products annually to collectors in more than 80 countries, Mighty Jaxx’s presence in Europe will continue to grow in the coming months as it secures deals with EU retailers.

“Following the recent announcement of our Borussia Dortmund (BVB) collectibles range, we are pleased to announce our collaboration with the iconic Premier League club, Manchester City. Sports and collectibles have gone hand in hand for many years – and memorabilia reignites classic moments, like Agüero’s title-winning 93:20 clincher, and helps them to live on for many generations. At Mighty Jaxx we love working with the top athletes and sports brands to bring these avid collectors high quality and artistic keepsakes.” says Alex Neal, Managing Director (Europe) at Mighty Jaxx.

“We are proud to work with Mighty Jaxx for the 2022/23 season on these official licensed collectibles, giving our fans another way to connect with their club and players. The unique styling and attention to detail that Mighty Jaxx have paid to the design of the kits and the player likeness is very impressive. We look forward to working with them to expand the collection.” says Gavin Johnson, Senior Licensing Manager at Manchester City.