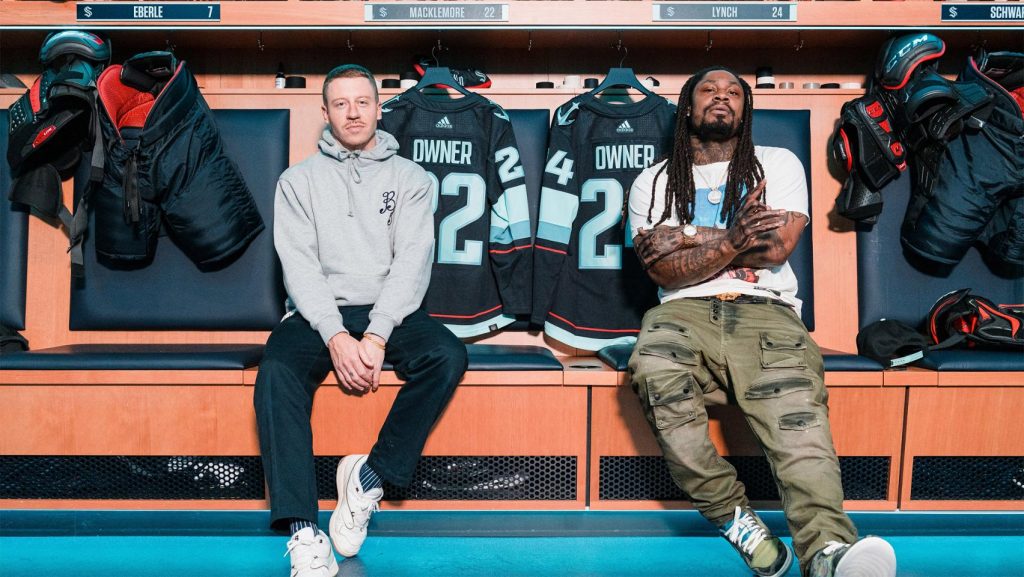 Macklemore and Lynch attended the Kraken’s 4-2 win against the Ottawa Senators at Climate Pledge Arena on Monday to celebrate joining the ownership group and Macklemore said he plans to attend a lot more games going forward.

“I am a Seattle sports fan through and through, have been my entire life,” Macklemore said. “I think that sports define a city. They bring people together. It gives us one common purpose to root for. It’s really the spirit of the city in so many ways, and to be a part of that new era that is the Kraken, that is the NHL in Seattle, that is the new arena, to do that was a no-brainer in terms of the opportunity. It’s just something that I can’t really even put into words.

“It’s a big moment for myself, for Marshawn — we’re both super pumped to be involved — for my family and for the future.”

Macklemore and Lynch join the Kraken Investor Group led by David Bonderman, founder and majority owner, and Samantha Holloway, chairperson of the Kraken’s executive committee. In their new roles with the first-year NHL expansion team, Macklemore and Lynch are expected to lead Kraken and Climate Pledge Arena initiatives to connect with hockey fans, music lovers and community members.

“We are fortunate to have an incredibly strong investor group, which has guided the franchise over the last four years,” Holloway said. “We are now adding two hometown heroes who share our values and desires, to give back to this great city and continue to make hockey a sport for everyone.”

Macklemore, whose given name is Benjamin Hammond Haggerty, is a Seattle native who cofounded The Residency, a hip hop and youth development program creating prominent opportunities for aspiring young artists in the region and a long-time supporter of the community and arts. He will work with the Kraken and arena to produce music events to serve the community.

“We have a really cool opportunity with Climate Pledge because it’s not just sports,” Macklemore said. “We have an arena that puts on some of the best concerts in the world, a state-of-the-art sound system, everything is brand new. It sounds amazing. I’ve been to a couple shows. So there’s that side of it, but there’s also what type of activation can we do while there are sporting events, and I think that the Kraken have done a great job of imagining local musicians in this space and giving folks a platform that they normally wouldn’t have to be able to perform in different pockets of the arena while sporting events are going on.”

Lynch played seven of his 12 NFL seasons for the Seahawks and helped them win their first championship in 2014 when they defeated the Denver Broncos 43-8 at Super Bowl XLVIII. In retirement, Lynch remains connected to Seattle and his hometown of Oakland, California, helping underprivileged youth with his Fam 1st Family Foundation.

Lynch also was a guest announcer at the 2021 NHL Expansion Draft, when the Kraken announced their first 30 players. As a minority investor, he plans to be active in Seattle’s “Hockey is For Everyone” campaign and work with the team to plan events focused on young people and community activism.

“On God, I’ve been a part of a lot of things, but this is something I never would have imagined,” Lynch said. “As a young hyena, I always dreamed of playing on a professional team but owning one is something special. As I look back on some of my accomplishments — I retired before I was 30 and now being an owner of a professional club at the age of 35 — I’m [going to] continue to count my blessings. Being a part of the Seattle Kraken is something big for me.

“It gives me another chance to get a ring after helping bring the first NFL one to the city. And if you thought I was goin’ somewhere, nah Seattle, I’m here! Stand up!!!!”

Macklemore said he didn’t follow hockey when he was growing up because Seattle didn’t have an NHL team. A trip to watch his nephew play a youth game in Florida opened his eyes to the excitement of the game.

“Within a couple minutes, I was, like, up against the glass screaming, completely into it and I was like, ‘OK, I get hockey now,'” Macklemore said. “I didn’t get it before just watching it on TV. To see live and in person, the speed and just the intensity and the aggression overall, really drew me in. So the minute it was announced that we were getting a team in Seattle, I was like, ‘OK, this is going to be something that I’m going to get into.'”

“There was a lot of hurdles and hoops to get through, and Tod and Tim Leiweke were really instrumental in me becoming a part of this group and wanting to bring me on board,” Macklemore said. “As a you can imagine, there’s a lot of bureaucracy behind the scenes, stuff that has to get taken care of. So a shoutout to them, a shoutout to my whole team that made it happen.”

In a video posted on the Kraken’s Twitter account Monday, Macklemore suited up in full hockey equipment, including a Kraken practice jersey, to work on his skating and shooting while Lynch took a turn driving the Zamboni at Kraken Community Iceplex. Macklemore said he has skated three times in his life.

Don’t expect to see Lynch skating with him, though. “He’s more of a Zamboni guy,” Macklemore said.