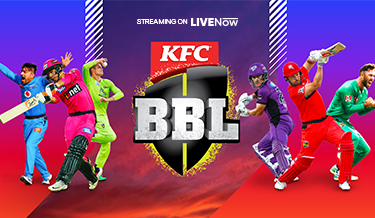 Following Australia’s T20 World Cup victory, the upcoming BBL11 tournament will be the most competitive yet, with 8 teams competing from Sunday 5th December and throughout the winter. Australian cricket fans can purchase pay-per-view Passes for 2.99 or a Season Pass for £24.99 exclusively from LIVENow.

Head of Sport, Peter Leible comments, “We’re delighted to add to our live sports programming this winter to include Cricket Australia’s men’s Big Bash League tournament. We’re pleased to give cricket fans who live abroad easy access to watch these matches from wherever they call home.”

Alistair Dobson, Cricket Australia’s ‘General Manager – Big Bash Leagues’ said, “We’re delighted to welcome LIVENow on board to stream the BBL|11 season across a host of Asian and European countries. The BBL is one of the world’s best T20 Leagues and we hope our fans enjoy tuning in from wherever they are.”

LIVENow’s Australian cricket coverage builds on the service’s fast-growing portfolio of sports rights. In Singapore, LIVENow were the exclusive home for EURO 2020 this summer and are bringing fans live pay-per-view coverage from the English Premier League throughout 2021/22.