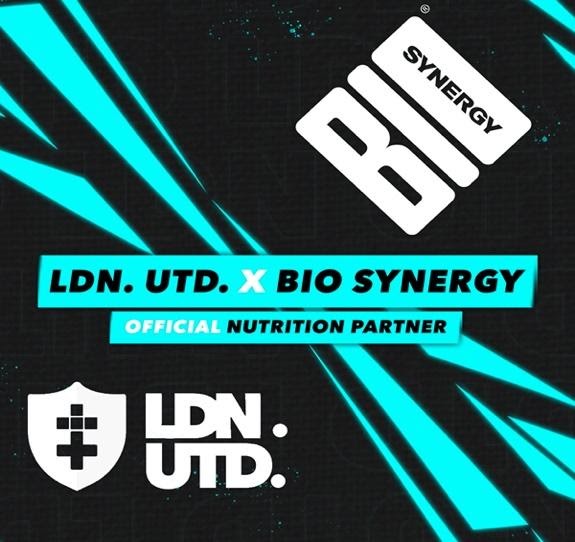 LDN UTD, the esports org that unites gaming with social responsibility, has announced an extension of its partnership with award winning supplier of wellness and nutrition products, Bio-Synergy, who will continue as its Official Nutrition Partner for LDN UTD’s recently formed DOTA 2 team.

Throughout the next few weeks, as LDN UTD’s DOTA 2 team compete in the ESL UK Premiership, Bio-Synergy and LDN UTD will be running an #UpgradeYourself campaign, with personalised nutrition and fitness plans for LDN UTD’s players. The prominent personal trainer Dida has been tasked with putting the LDN UTD team through their paces, and Bio-Synergy will be aligning the nutrition plan with its range of nutrition products.

WeAreFearless, the strategic sports and esports creative agency has been appointed to activate the LDN UTD and Bio-Synergy partnership. Centered around the agency’s HumanValues™ tool, Fearless developed the strategic direction for the partnership, using fan insights around performance in esports to develop the campaign #UpgradeYourself. The campaign will run through LDN UTD’s DOTA 2 competition, engaging fans with reactive performance content at key match moments.

Oliver Weingarten, Co-Founder and CEO of LDN UTD said: “Both LDN UTD and Bio-Synergy are devoted to performance in each of our sectors, and this partnership allows us to continue to work together and strive to improve the performance of our DOTA team, whilst providing an outlet for Bio-Synergy to engage within the esports eco-system. We are also pleased to be working with creative agency WeAreFearless on this campaign, alongside the tutelage of fitness trainer Dida, who we know will be pushing our gamers to achieve their best.”

Daniel Herman, Founder and CEO of Bio-Synergy said: “Having worked with DIda in the past, we understand the importance of both mental and physical performance in esports. We believe in the marginal gains having a material impact on performance and we look forward to working with LDN UTD to help the DOTA 2 team to excel in the ESL Prem, as well as engaging the community”.

WeAreFearless Founder Garry Dods said: “We’re excited to work with the teams at LDN UTD and Bio-Synergy to push esports creative and activation to a bold new level. We’ve used the power of our HumanValues™ insights in esports to really identify the key emotional drivers at a human level and #UpgradeYourself is about embedding Bio-Synergy right at the authentic heart of esports performance. We can’t wait to see the results”.

Dida said: “Good nutrition and gaming goes hand in hand – a happier and more productive gamer produces better results as a consequence. Furthermore the addition of working out is a necessity – movement is medicine to the body! By aligning these two elements together we can not only produce a winning team, but one that inspires a whole host of people to get fitter and healthier. This will be the narrative I will be pushing with LDN UTD as we look to improve our foothold in the gaming world.”