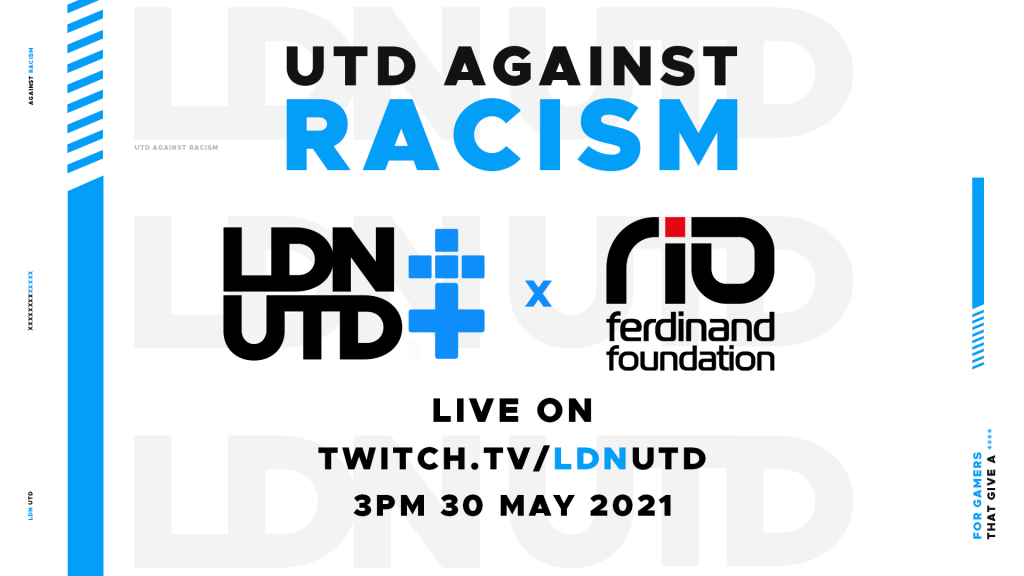 LDN UTD and the Rio Ferdinand Foundation has announced UTD AGAINST RACISM, an online event empowering the young community through the medium of esports, to take place on 30th May2021.

LDN UTD is the esports org that promotes healthy lifestyle and addresses social issues, using the platform of gaming and esports. LDN UTD  has previously held events to address special issues including knife crime, and in October last year, held UTD Against Racism with Leyton Orient FC and Kingston Race and Equalities Council.

The Rio Ferdinand Foundation works to strengthen the UK’s most deprived communities to tackle inequality, and recently announced a programme of activities to celebrate its ten year anniversary. The forthcoming UTD Against Racism stream draws on the support of like-minded organisations, to stand together, to inspire opportunity, and to celebrate youth-led social action.

Fans will be offered the opportunity to compete in open qualifiers for FIFA 21 with a chance to play alongside celebrities in the finals brackets on Sunday 30th May, which will be broadcast live on LDNUTD’s Twitch channel and produced by 1080 Media. In tandem with the theme of empowering young people, the stream will include a short film shown in segments on how young people see solutions to racism one year on from the death of George Floyd, as well as other content from celebrity participants, and Rio Ferdinand Foundation Youth Ambassador Leo Brown from Belfast, an ex Birmingham City footballer who broke into esports when recovering from injury.

Rio Ferdinand said, “My hopes for the event is to get loads of young people involved, not because they have to get involved, because they want to. Obviously, Rio Ferdinand Foundation being very youth orientated, it will be amazing to see a lot of interaction with young people. I will do everything I can to support this. It hits home, it means a lot to me in my own personal life and I don’t want my kids to experience what I’ve experienced or experience things that other people have experienced. Now is the time to change”.