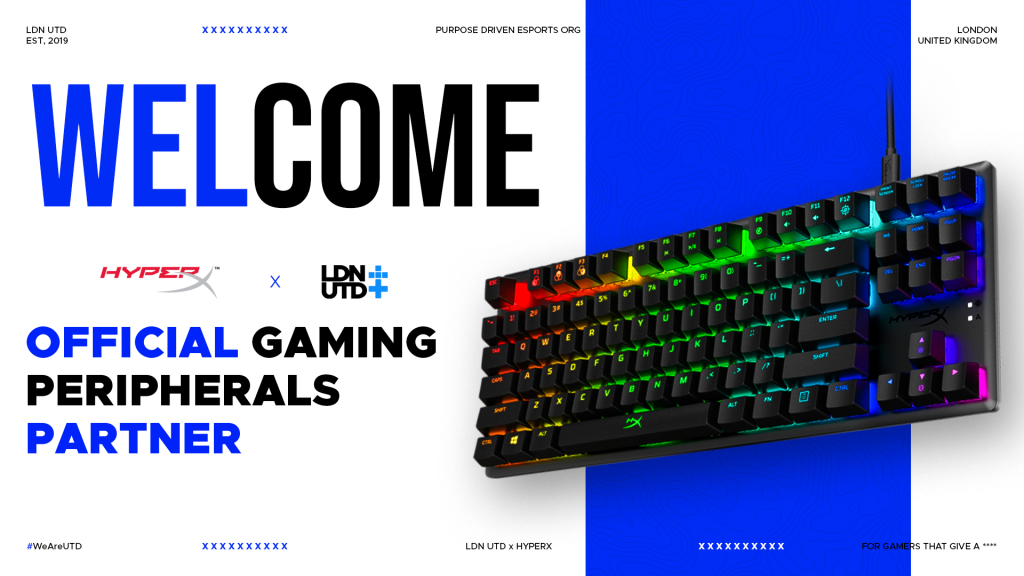 LDN UTD has become recognised as the org that utilises esports and grassroots gaming to address social issues through both online and offline events. Most recently at Samsung KX in partnership with the Mayor of London, health and wellbeing in gaming was front and centre in discussions between content creators and celebrities, including LDN UTD new Co-Owner, Connor Ball, to an audience of 130,000 on Twitch.

Simultaneously, LDN UTD plays host to a diverse roster of talented creators and esports teams, including a VALORANT roster which competes in the VCT EMEA Challengers against some of Europe’s most recognisable esports brands.

Accordingly, LDN UTD will be championing HyperX’s core message of ‘We’re All Gamers’ by targeting inclusion in esports through a variety of avenues in 2022, from grassroots tournament initiatives to community focused events, all while continuing to support their grassroots and professional esports rosters.

Additionally, HyperX will feature across LDN UTD’s 2022 jersey, be integrated into digital branding assets, and future tournaments hosted on LDN UTD’s digital economy platform. HyperX peripherals will be utilised by staff and visitors at LDN UTD’s Centre Of Excellence, including young persons attending for UTD EDN workshops, the first cohort of which began their journey with us on Monday 21st February and can be seen on our socials. The purpose driven esports venue is set to offer gamers a safe space to play video games, attend workshops on mental & physical health and fitness, and be offered opportunities relating to further education and employment prospects.

Oliver Weingarten, CEO of LDN UTD said: “Ever since establishing LDN UTD, HyperX has provided unrivalled support to ensure we could support our events by providing our community with the best in class products, whether at GrimeAgainstKnives or most recently with All Access Gaming. We look forward to continuing our long term partnership to ensure the community can continue to experience HyperX’s peripherals in our Camden Centre of Excellence.”

“HyperX is proud to partner with LDN UTD. Their work around diversity and highlighting the good in gaming is something we’ve always admired.” said Amy Ash EMEA Events Specialist for HyperX. “We’re excited to continue supporting them with our peripherals and helping to bring inclusivity to the forefront of gaming.”