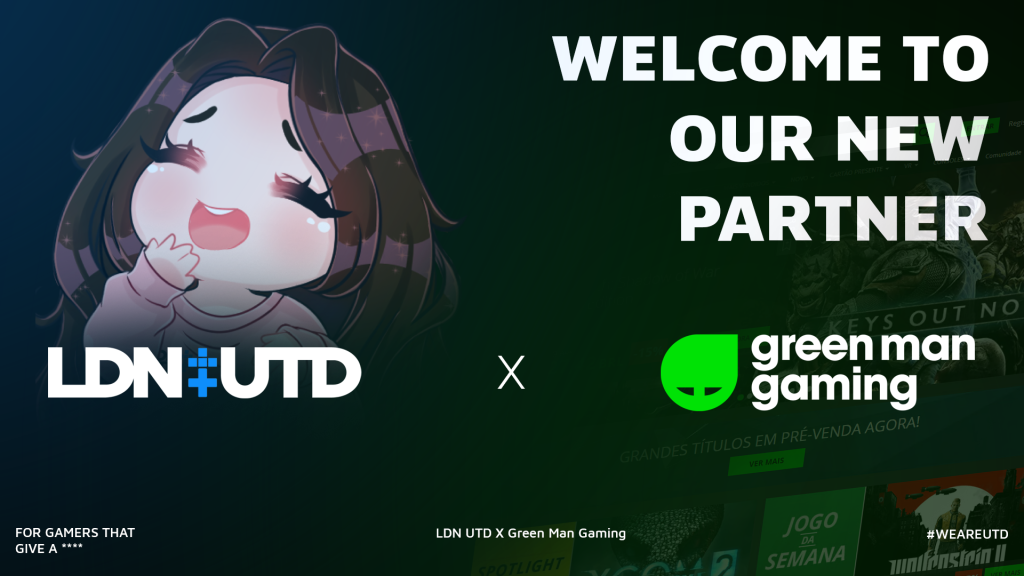 LDN UTD, the purpose driven esports org, today announces a strategic partnership with multi-award-winning global video game retailer, publisher, and distributor, Green Man Gaming. LDN UTD and Green Man Gaming will continue to use gaming and esports to raise awareness of social issues such as inclusion, representation and mentorship including a joint programme at LDN UTD’s forthcoming Centre of Excellence. The partnership will also see the combined communities benefit from a range of unique opportunities from customised digital offerings to bespoke esports tournaments and many more.

LDN UTD has become synonymous with addressing social issues via physical and online events, and most recently hosted UTD Against Racism with the Rio Ferdinand Foundation, and last month launched a community purpose-driven NFT campaign. With its Centre of Excellence due to open in Camden in London later this month, it will be the first purpose driven esports venue to offer gamers a safe space to play video games, and attend workshops on mental/physical health and fitness, and be offered opportunities to further education or employment prospects.

Green Man Gaming has long been recognised as a global video game retailer, publisher and distributor, and has a long history of being involved in social causes. Most recently pledging to continue the fight against climate crisis through the UN Environmental Programme initiative Playing for the Planet Alliance and supporting developers and students from underrepresented backgrounds through initiatives with Payload Studios and St Mary’s University. The team were  recognised at the St. Mary’s Be Smart/ Employability Confident Awards 2021 for their contribution to the Be SMART Programme in 2021, offering paid internships and mentoring to students from underrepresented backgrounds.

Oliver Weingarten, Founder/CEO of LDN UTD said, “It always makes sense to partner with organisations that align with values and can enhance our offerings to the community, and with Green Man Gaming, we have the perfect partner to form a long term strategic partnership that encompasses many elements.The partnership with Green Man Gaming will allow us to reach even more people with our messaging, which can only be a positive.”

“At Green Man Gaming, we believe that games are for everyone and have the power to drive positive change. In LDN UTD we have found a partner that shares our values and drive to use games for good. We’re excited to embark on this partnership that will not only benefit our direct consumers but has the potential to reach and serve the wider games community.”