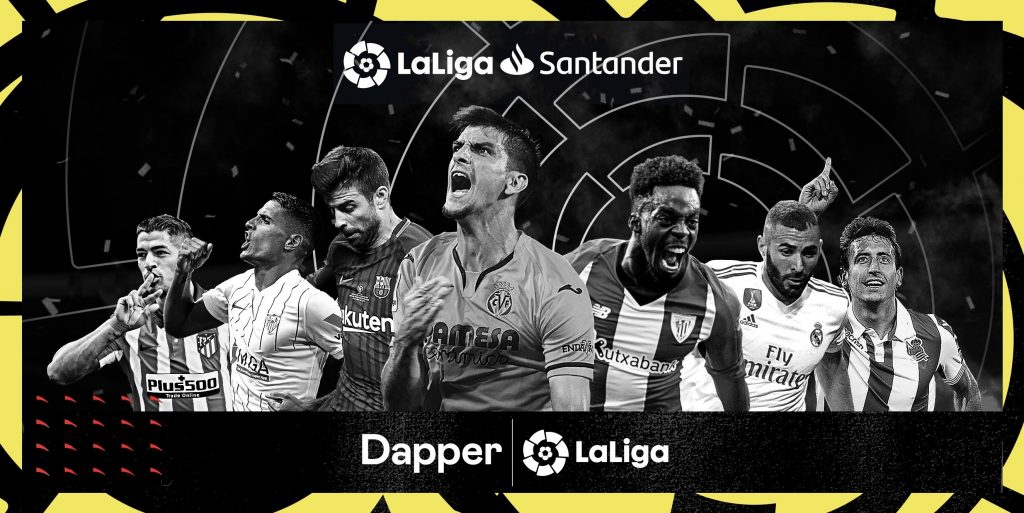 Dapper Labs and LaLiga, today announced a partnership to introduce Official Football NFT Collectible Highlights at scale. Created by the team behind NBA Top Shot, the new experience will give fans the opportunity to collect and own some of the most talked-about contemporary and iconic in-game Moments from their favorite teams from over 10 seasons of play. Featuring dynamic video-based Moments from all of LaLiga’s clubs, including Real Madrid, FC Barcelona, Atlético de Madrid, Sevilla FC, Villarreal CF, Valencia CF, Real Betis, Athletic Club, Real Sociedad, RCD Mallorca and many others, the new experience will be available to fans on Flow blockchain starting June 2022.

As fans enter into the all new experience, they will instantly be immersed in football culture, gaining access to some of the most notable in-game Moments to buy, collect and own. Through a dedicated peer-to-peer marketplace, fans will be able to buy or sell parts of their collections with fellow football enthusiasts. Every purchase can be made via credit card through a Dapper wallet, to ensure that every transaction is as easy as possible.

“The partnership between LaLiga and Dapper Labs will bring us even closer to our fans worldwide through a new and growing medium, and alongside the industry partner that created the NFT video product for NBA” said Javier Tebas, president at LaLiga. “This experience will have soccer fans all over the world at the center, giving them a platform and product to enjoy and express their passion for LaLiga in a unique and different way.”

With access to both current Moments and a rich archive of historical Moments, the new experience will also give fans the ability to relish in the rich historical context and heritage of one of the best leagues in the world. Fans will be able to learn about timeless rivalries between teams, understand the league’s golden past, and dive into the evolution of a team or player by being presented with experiences that bridge the past and present.

While a blockchain-based experience, the product will also give fans a way to be a part of the in-game action. Through a variety of fan activations developed around key tentpole events during the season, fans will be able to enter to win contests that will give them once-in-a-lifetime opportunities, like being flown to Barcelona for the weekend where they will be able to watch ElClasico, the biggest football game in the world, from a VIP Box at Camp Nou.

“We couldn’t be more excited to be partnering with LaLiga to launch the ultimate fan-driven highlights collectible experience that is unlike anything in the space before,” said Caty Tedman, Head of Partnerships for Dapper Labs. “With over 3.5 billion football fans around the globe, the experience’s layered environment has the power to revolutionize how fans connect to the sport of football and how they engage with the teams and the players they love, both virtually and in real life. We look forward to working alongside LaLiga, home to some of the best clubs  on the planet to bring this wildly new and dynamic fan-driven experience to football lovers everywhere.”

“As Barcelona’s captain for a decade, I enjoyed some of LaLiga’s greatest moments. I also experienced some of the game’s biggest lows; but in spite of it all, the game would be impossible to play without our fans,” said Carles Puyol, six time LaLiga champion, 3-time UEFA Champions League champion, and captain of FC Barcelona from 2004 to 2014. “Fans give us energy that encourages us not to give up. They help us dig in when we’ve got nothing left and they give us support when we need it. To be able to be a part of an experience that brings players one step closer to their biggest advocates is exciting and meaningful. I look forward to what this relationship holds.”

Like NBA Top Shot, the new experience is built on the Flow blockchain, developed for consumer experiences at scale. Flow allows fans to trace and verify the authenticity and scarcity of their digital collectibles.

This agreement is also part of the efforts of LaLiga North America (joint venture between LaLiga and Relevent Sports), which has an active role searching and looking for new interesting and attractive partners and industries to involve with LaLiga.

For more information on the new experience and how to sign up in advance for experience, please visit laliga.onflow.org.