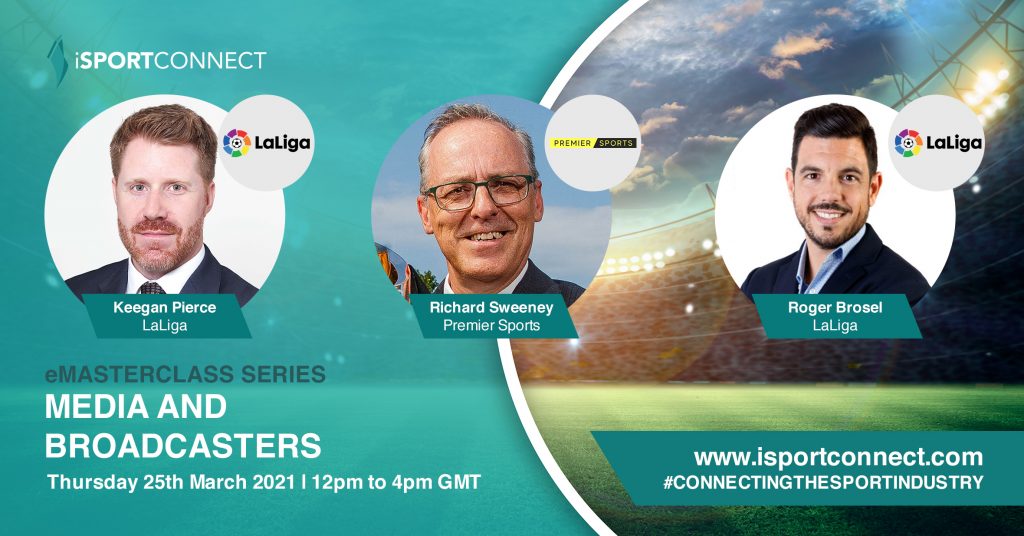 We are pleased to announce the newest speakers for our Media & Broadcast eMasterclass to be held on March 25th.

Hailing from Dublin, Ireland, Richard’s career in the sports broadcasting industry spans 30+ years having been heavily involved in the early formation of Setanta Sports. He was COO in the UK of Setanta Sports. Richard has been CEO of Premier Sports since 2011 overseeing operations from offices in Dublin, London and Luxembourg acquiring the rights to globally renowned competitions including the Rugby League World Cup, NRL, Scottish Cup Football, LaLiga, Serie A, PRO14 during this time. Richard has also managed the creation of sister channel FreeSports in 2017, the operations of designated boxing channel, BoxNation in late 2019 and more recently, the expansion of Premier Sports to Asia in 2020 with a dedicated rugby OTT platform with rights to Six Nations, Gallagher Premiership and PRO14.

Sports media professional with 16+ years of experience in live broadcast, programming and digital media. Before joining LaLiga >5 years ago, Roger led the content team for Manchester City and was previously executive producer for big sports events in four different continents, working for broadcasters such as beIN Sports. Based in Barcelona, Roger’s areas of expertise are sports content, strategy and production management with a solid tech background. He has also supervised rights management, content creation and delivery for sports rightsholders and governing bodies.

Other already revealed speakers are Jérôme Parmentier, Head of Broadcast & Media Rights at the International Olympic Committee and Johan Cederqvist, Head of Pay Channels and Rights at TV4 Media.

If you would like to register interest for this limited event please email bethany@isportconnect.com or by heading to this link – https://www.isportconnect.com/event/emasterclass-series-media-and-broadcasters/

We do hope you will be able to join us for this all-new event, and follow iSPORTCONNECT’s website and social media channels for the key news to ensure you do not miss out on what should be a terrific afternoon.