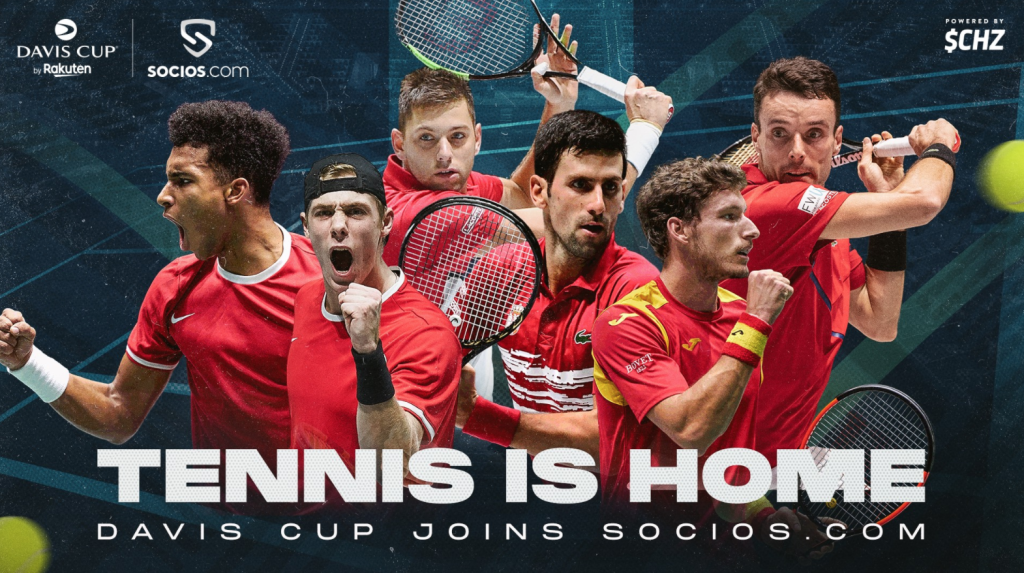 The International Tennis Federation (ITF) and Kosmos Tennis, organizers of the Davis Cup by Rakuten, in partnership with Chiliz, leading blockchain providers for the sports and entertainment industry, have announced plans to launch the official Fan Token of the Davis Cup By Rakuten on Socios.com.

The $DAVIS Fan Token will grant tennis fans worldwide unprecedented access to the tournament widely known as the World Cup of tennis. Engagement opportunities for $DAVIS Fan Token holders will include the chance to have a say and a vote on a number of initiatives by taking part in interactive polls that will run on the Socios.com app.

In addition, fans can put their skills to the test against other fans from around the world in games, competitions and quizzes, competing in global leaderboards and earning real-life and digital club-related accolades, benefits and experiences along the way. Fans will also be able to access exclusive content and experience Socios.com’s geo-location, augmented reality feature ‘Token Hunt’.

The $DAVIS Fan Token will be released during the Kosmos Sports Summit, a one-day conference that will bring the sports business community together in Madrid on November 4th. The first poll will be revealed as soon as the FTO is over. Fans can look forward to taking part in an unprecedented decision that will see them leave a footprint that will be widely seen throughout the tournament.

The total supply of the $DAVIS Fan Token as well as the number of tokens that will be released during the FTO, the price and other details will be announced in the coming days.

The 2021 edition of the Davis Cup Finals by Rakuten will take place from November 25th to December 5th in three different European venues (Madrid, Innsbruck and Milan), with a total of 18 teams taking part. The semifinals and the final will be played from December 3-5 in Madrid.

With over 1.2 million users worldwide, Socios.com is a direct-to-consumer (D2C) platform that uses blockchain technology to provide the world’s leading sporting organisations with the tools to engage with and monetize their global fanbases.

More than 70 major sporting organizations have partnered with Socios.com, including FC Barcelona, Paris Saint-Germain, Juventus, AC Milan,  Atlético Madrid, Manchester City, Inter Milan, Arsenal and the Argentina and Portugal national football teams, as well as a number of leading teams from F1, esports and cricket. The partnership with Kosmos Tennis is Socios.com’s first step into tennis, a sport with over 1 billion fans worldwide.

Created by Chiliz, the leading blockchain provider for the global sports and entertainment industry, Socios.com has major expansion plans and is targeting many more Fan Token launches throughout the world. Socios.com has multiple office locations around the world and has already opened new regional headquarters in Madrid, Istanbul, São Paulo and Buenos Aires. The company will open a new office in North America in the near future.

Enric Rojas, CEO of Kosmos Tennis, said: “The partnership with Socios.com and the launching of the $DAVIS Fan Token will allow us to improve the experience of our fans and make them feel part of the competition”.

“Fans play a very important role in the Davis Cup, and now that travelling abroad is slightly more complicated, the Fan Token will guarantee that fans can enjoy the competition and feel a part of it from their homes”.

Alexandre Dreyfus, Founder and CEO of Chiliz and Socios.com, added: “The Davis Cup creates passion and excitement among its fans like no other competition in Tennis.

“We’re thrilled to partner with Kosmos Tennis to launch the $DAVIS Fan Token and look forward to giving fans an active role in the tournament.  This partnership is the perfect way for us to enter the world of tennis and we look forward to more big announcements in the sport in the future.”