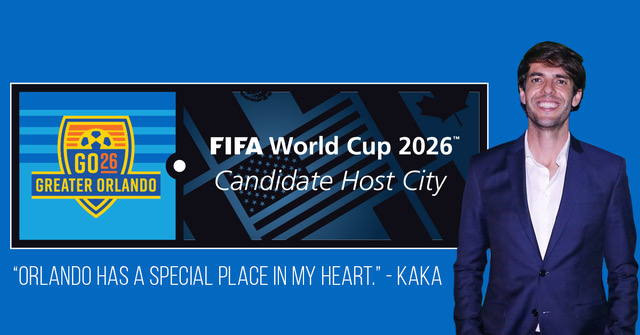 Kaka, the Brazilian soccer star who culminated his career playing for Orlando City SC from 2015 to 2017, has become an Honorary Chairman of GO26, Orlando’s bid for selection as one of 10 US host cities for the 2026 FIFA World Cup™.

The announcement comes as a big FIFA delegation starts its tour of nine US candidate cities in Boston today and reaches Orlando on Saturday 18th. The delegation is led by Victor Montagliani, CONCACAF President and FIFA Vice President, accompanied by Chief Tournament & Events Officer Colin Smith.

Further city visits are planned for later in the year. In total, 17 US cities are competing for 10 selections in the final line-up.

The tours will include stadium inspections, information gathering, presentations and detailed negotiations with city authorities.

Kaka said: “Orlando has become a home for soccer in the U.S. and deserves to host the greatest soccer event on the planet. It provides all the infrastructure top athletes need, as well as plenty of hospitality and entertainment for the fans”.

“It’s a great honor to lend my international soccer experience and become part of the GO26 bid team. I joined the Orlando City MLS franchise from its inception and have witnessed not only incredible growth but genuine passion for the sport. Orlando has a special place in my heart”.

For the Greater Orlando Sports Commission and its CEO, Jason Siegel, the inspection visit is a major milestone. “We have been working towards this for a year – it’s an incredibly important moment for us and for our 450-strong organizing committee, who have alongside us since 2017”.

“The endorsement of Kaka is very valuable, because he sees this city – and our wonderful facilities – through the eyes of a World Cup winner. With 48 teams competing in 2026, everything has to be right for the players and fans.”

During an extraordinary career, Kaka was described as ‘the complete player’ by Pele, following his selection as 2007 FIFA World Player of the Year.  Kaka’s Brazil and UEFA Champions League winning AC Milan teammate Ronaldinho described him as the best player in the world: “There was nothing he couldn’t do”.

Orlando is America’s most visited destination, with 75+ million incoming tourists a year and is the second fasted growing city in the US.

The 2026 FIFA World Cup™ will be played in 16 cities across Canada, Mexico, and the United States. The selection process by FIFA to narrow down the list of US Candidate Host Cities is underway now and results will be announced in due course. It is projected that FIFA will select 10 US venues, in addition to the three venues in Canada and three venues in Mexico.