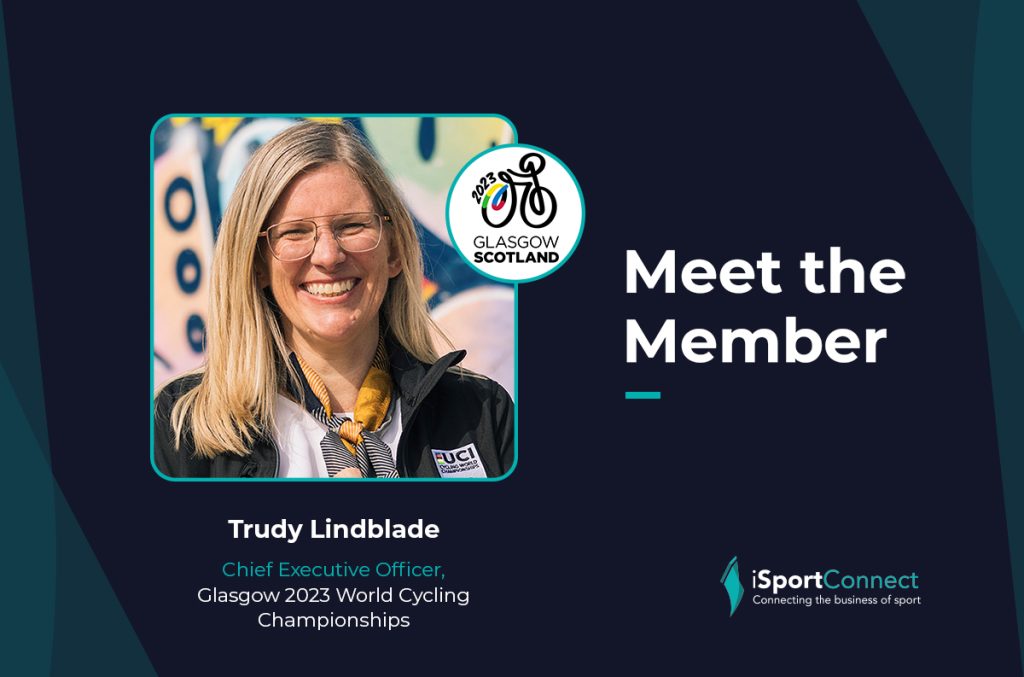 “I Think It’s A Really Exciting Proposition Because It’s Not Been Done Before.”

iSportConnect speaks to Trudy Lindblade, CEO of the 2023 UCI Cycling World Championships in Glasgow and across Scotland, where the sport will come together as a whole for the first time in its history in just under 18 months’ time.

Next summer, Glasgow and locations across Scotland will play host to the 2023 UCI Cycling World Championships, set to be the biggest cycling event ever held anywhere in the world.

The radically transformed competition will be the first of its kind for the sport, bringing together all of the primary disciplines into one major event, from track and road cycling to BMX, Mountain Biking and Para-cycling, as well as other events.

“You feel the burden at times but it really motivates you.”

Early last month, the competition dates were unveiled as the 3-13 of August 2023, where 13 different world championships will come together to create this brand new and unique festival of cycling.

Following the announcement, and having just passed the milestone of 18 months to go until the event, it was a great time for iSportConnect to check in with event CEO, Trudy Lindblade, to see how preparations for the event were going and the impact it hopes to have on the sport in the long term.

You’ve been in the CEO role for 18 months now Trudy, with just under 18 remaining until the event, so you’re halfway through the process, but what inspired you to make the move from Australia and take this role?

For me there were a couple of reasons. When I actually first saw and applied for the role it was before the pandemic and the chance to move overseas for a once in a lifetime opportunity for me career-wise, working on something that had never been done before and had a world class event at its core, was great.

There’s also an element of being entrusted with turning the UCI and Scotland’s vision into reality. You feel the burden at times but it really motivates you. Prior to this I was working in Melbourne for the state of Victoria’s major events and tourism body and now I’m working for a special purpose vehicle set up as a subsidiary of VisitScotland. So it’s been a similar environment.

Professionally, working on something for the first time in Scotland which has significant credibility in terms of creating, planning and delivering major events is a great step. Plus bringing my family across with two young children, they’re at an age where they’re more resilient than you think and what we’ve seen is testament to that. That opportunity to experience a new country where you can learn and take things away helps to round you out.

“It’s part of the UCI’s wider ambition to have all the cycling disciplines together to ensure a sustainable future and show there is this depth and breadth to cycling that probably a lot of people don’t know.”

The appeal of Glasgow and Scotland was strong, I’d never been here before but had heard many good things. Picking up your life in the middle of a pandemic and moving overseas probably shows a bit of my personality I think. I’m prepared to sort of put myself out there and take on the challenge and I’m really glad we have.

You had worked in cycling before with the UCI delivering events, so did that play a role at all?

With cycling I believe that once you experience it, whether standing on the side of the road or watching mountain bikers fly down a steep hill, there’s something about a sport where you think ‘I can also do that, but I can do it in different ways and at different ages’.

I’d never worked in cycling when I started work on the road project for the UCI in 2008.I thought I didn’t know enough about that sport, but you’ve got to put that to one side and think ‘I know about delivering major events’. So you bring your own expertise and recruit other people around you who are experts on the sport.

So what’s been the main reason behind bringing all of these events together in one place to create this new showpiece major event?

That is exactly what it is, a showpiece event for cycling and it is a really good one for the UCI because it was actually part of the president’s vision (David Lappartient) when he was elected to his first term about bringing these championships to life. Scotland was a very safe pair of hands to have this event delivered for the first time.

It’s part of the UCI’s wider ambition to have all the cycling disciplines together to ensure a sustainable future and show there is this depth and breadth to cycling that probably a lot of people don’t know. You see the blue riband events as part of the Olympic Games programme but there’s a whole raft of BMX and mountain bike events people will never have heard of that they’ll get to see as part of this combined World Championships.

“We can use this to take cycling to wider audiences both commercially, but also just as general consumers.”

We can unify cycling as a sport and do the same with the whole of Scotland through the championships, promoting the message about riding bikes more often, harking back to those policy ambitions about health, transport and participation in tourism.

Creating a mega event every four years for two weeks that has significant global reach through TV audiences, people lining the roads, sitting in stadiums or following on social media, putting cycling front and centre in the year preceding the Olympic Games is a great lead-in and opportunity for cycling and the UCI, as well as the host city.

So how are the current preparations for Glasgow next year going so far?

We’re like a startup organisation, having started from scratch. Much of it has been taking the vision of the bid and bringing that together to ensure our strategy is in place. We want to see the power of the bike in everyone’s everyday lives. That is the centrepiece but, of course, delivering a world class event on time and on budget to new audiences, that’s hard.

We can use this to take cycling to wider audiences both commercially, but also just as general consumers. There’s been a lot of work going into that and then there’s the practical piece of just building an organisation, getting our venues and plans in place and building that momentum.

We’ve designed a fabulous brand we affectionately call ‘the squiggly bike’ that will hopefully live long after the event, inspired by the legacy of the traditional event.

This is a pan-Scotland event, we’ve announced our venues in Glasgow, with the city being the centrepiece, but we will be going out and around Scotland which is a difference to the 2018 European Championships or the 2014 Commonwealth Games. Dumfries and Galloway will host the Para-cycling Road World Championships and Stirling will host the time trial, with more venue announcements to come.

We’ve got some great momentum at the start of this year and being back in the office is great. Creating a plan and event online is not what events people are born to do. We’re born to be on-site, collaborating with people and working with our partners, making sure we’re delivering on our partnerships as they’re critical to any major event success.

In terms of being a new event on a much bigger scale, has this been creating greater attention from potential partners and sponsors as a much stronger prospect for them to get involved with?

I think it’s a really exciting proposition because it’s not been done before. Cycling is booming coming out of the pandemic, with more people riding bikes, so the timing is good for us in 2023. We hope to be a shining light and we’ve talked about this purpose led approach which is specific to us; health, sustainability and technology driven.

“I think it’s a really exciting proposition because it’s not been done before.”

For Cycling it’s about scale and global reach in bringing this together. The challenge is getting people to see it and feel it like we do, which is tough because we’re working on it every day. But that policy and vision is a strong story for a partner to tell with us.

Have there been any specific challenges that you’ve had to overcome?

Glasgow and Scotland was such an opportune host, particularly already having the velodrome that was built for the 2014 Commonwealth Games. The complexity is actually bringing 13 events into one, and making it look like one, seamlessly. Up to now they’ve all had individual profiles so that’s part of our challenge but also part of our opportunity.

We’re using a slightly different model we’re calling the hub and spokes, keeping our organising committee small, focusing on the governance, planning, marketing and commercial success. But the actual delivery will be by the spokes, people experienced in these events who can share expertise where necessary. We’re trying to keep that expertise within Scotland, and if not Scotland then the UK, so we can create those longer term operational legacies, particularly from working very closely with Glasgow City Council.

You’ve spoken of the overall perspective and wider opportunities, what are the goals the competition is looking to achieve?

At the very heart of what we’re doing we want to deliver this incredible, innovative, world-class event, then how can we test and challenge the status quo, that’s not always easy but we’ve got the licence to do that.

“We’ve already launched an £8million facility fund delivered by sportscotland to create dedicated facilities across Scotland and that’s been inspired by this event.”

We’ll be telling the story of the power of the bike and what it can do for people. Of course our end goal is more people riding bikes, whether that be inspirational in creating the next champions or getting your bike out of the garage for the first time in a few years. We’ve got three main themes of people, place and planet.

How do we leave a tangible legacy? We’ve already launched an £8million facility fund delivered by sportscotland to create dedicated facilities across Scotland and that’s been inspired by this event and there’s a few more of those to come. So it’s pretty exciting.