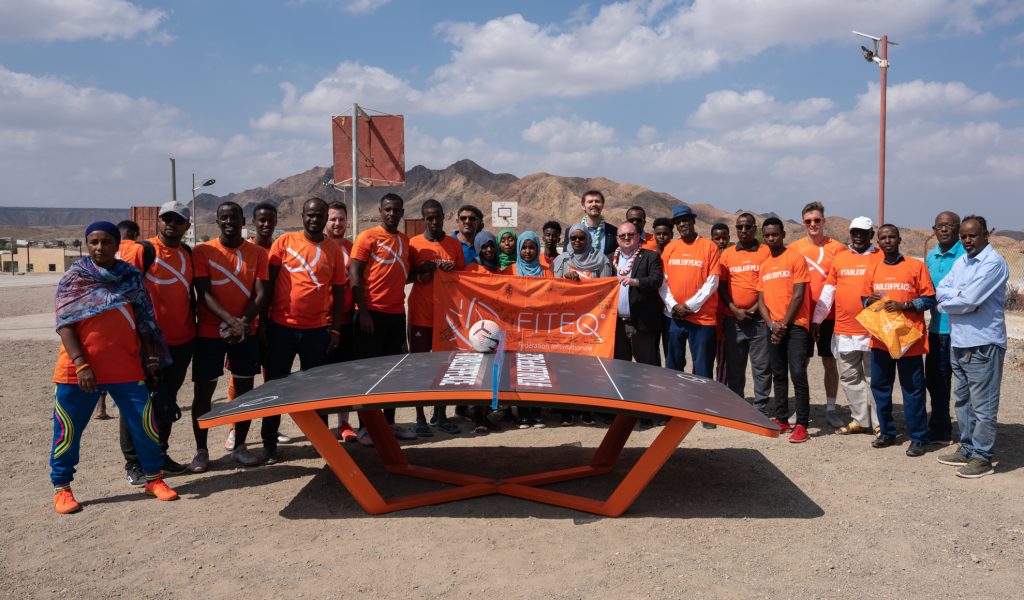 In a new Member Insights piece, FITEQ (The International Teqball Federation) discuss how they are looking to create a lasting impact with society as the federation continues to grow.

Since the outset, the International Teqball Federation (FITEQ) has sought to use the power of sport to have a lasting social impact. For the world’s fastest growing sport, established just under a decade ago, this means supporting the communities and environments that are most in need.

FITEQ Head of Diplomatic Relations and CSR Gergely Murányi explains, “We have developed a range of CSR and sustainability projects and collaborated with leading international organisations to ensure the governing body for teqball and para-teqball engages its global community on critical issues, such as supporting refugees and acting on climate change.”

“FITEQ developed a train the trainer initiative to ensure a long term legacy of young refugees being able to learn about and practice teqball to this day.”

It efforts to support refugees from conflict areas, as well as individuals from disadvantaged communities, began in the Zaatari Refugee Camp in Jordan, back in 2017. It was here that the organisation partnered with Peace and Sport to contribute to their Live Together programme. FITEQ developed a train the trainer initiative to ensure a long term legacy of young refugees being able to learn about and practice teqball to this day.

Following the success of the project in Jordan, FITEQ launched its own global programme under the banner of Table of Peace. This was launched in Djibouti in February 2021 with tables donated to three UNHCR refugee camps. According to Murányi, the long-term strategy of Table of Peace is “to engage young people in sporting activities to help give them an escape from the daily challenges they face, whilst also teaching them transferrable skills and key values such as teamwork, inclusivity and integrity.”

In addition to donating tables, FITEQ is implementing the programme around the concept of training the trainers that has proven to be effective in the Zaatari Refugee Camp. After the launch in Djibouti, FITEQ has already implemented the programme across four different continents, despite the ongoing travel restrictions related to COVID-19.

Whilst very much now a global phenomenon, teqball was born and bred in Budapest, Hungary, which remains the home of FITEQ to this day. With its close ties to the country, and with a strategic cooperation agreement with the Hungarian Government, FITEQ was honoured to donate its award-winning Teq tables to 69 schools in the most underdeveloped regions of the country.

However, the federation very much maintains an international focus and, in partnership with the Hungarian Ministry of Foreign Affairs and Trade, teqball has been part of a series of diplomatic donations in over 20 countries during the last three years. In countries such as China, Ghana, Israel, Japan, Nigeria, Palestine and Qatar, table donations were made to orphanages, schools, universities, and municipalities, with intention being for the sport to contribute to a healthy, active and more peaceful future for societies around the world.

Also on the on international stage, FITEQ teamed up with the United Nations Alliance of Civilizations earlier this year to promote the #OneHumanity campaign to teqball’s 5+ million social media followers.

Turning to FITEQ’s focus on sustainability, the governing body is a passionate advocate for the sports industry being a role model for wider society. Murányi noted, “In recent years, the world has gained a better understanding of the urgent need to act on climate change. A significant part of this important shift in mind-set can be attributed to young people. It is their future, and their children’s future, that we have a duty to protect. But to do so effectively, we have no time to waste and we must act now.

“Also on the on international stage, FITEQ teamed up with the United Nations Alliance of Civilizations earlier this year to promote the #OneHumanity campaign to teqball’s 5+ million social media followers.”

As a sports organisation with a global reach, FITEQ has an obligation to use its platform to build awareness of climate change and communicate clear and simple steps that can make a real difference.”

FITEQ is a UN Sports for Climate Action Framework Signatory and recently reinforced its commitment to climate action by joining the UN Race to Zero campaign. In its bid to reach net zero as an organisation and at all of its events, as well as supporting its 121 National Federations to do the same, FITEQ launched a Sustainable Development Handbook earlier this year.

The handbook outlines specific UN Sustainable Development Goals (SDGs) that are directly relevant to the sport and provides clear guidance on FITEQ’s ambition in each area. The handbook then proposes practical solutions that its stakeholders can adopt and implement to ensure they are a part of the teqball family’s overall contribution to the SDGs.

“FITEQ is not asking for major investment”, Murányi explains, “but if everyone starts small it can make a substantial difference. Start small, or start big – it’s entirely up to you. But make sure to start somewhere.”

The message from FITEQ is loud and clear – everyone can contribute. Teqball is growing exponentially from a sporting perspective, with thousands of new players and fans joining the global community every day. At FITEQ, using this growth to have a wider impact on society will always be a key priority.