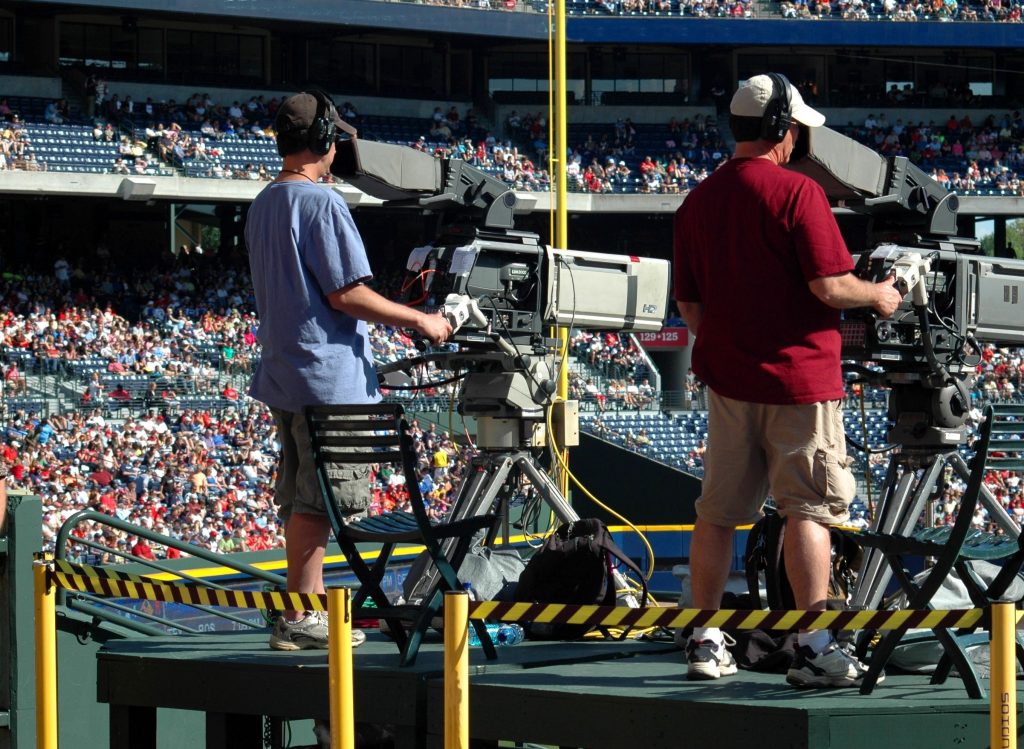 For our latest trip to the Digital Cafe, David Granger talks to Jean-Luc Jezouin, SVP of NAGRA Sports, to look at how sports broadcasting can be accommodated to those outside of the elite sports.

In this Digital Café we speak to NAGRA, a company who are supporting sport across the board get better access to broadcast technology.

What digital should do, more than anything, is democratise sport. What was once the preserve of the affluent or the established – live broadcasts, access to athletes – should be available to everyone.

“The top 90 sporting leagues around the world are bringing in roughly $85B in TV and marketing rights in only nine sports.”

However, there is also a danger of an increase in the digital divide, with major leagues, federations and clubs taking more and more of the time, engagement and money from fans.

The top 90 sporting leagues around the world are bringing in roughly $85B in TV and marketing rights in only nine sports. Which means there are thousands of leagues in more than 800 sports which bring in an estimated combined total of less than a billion dollars.

There are good reasons for this: cost of technology, complexity of the live broadcast infrastructure, relatively small size of the audience and potential demand. But this also means there’s an opportunity to serve these sports, and change the way they are represented, broadcast and monetised.

With a history which stretches back almost as far as television itself, NAGRA Kudelski clearly has pedigree, and they currently have more than 300 million subscribers on more than 400 million devices worldwide. And you don’t succeed for that long without a propensity to innovate. Which is why the company, and in particular its SVP NAGRA Sport, Jean-Luc Jezouin, looked at how they could expand their work in the sporting sector.

Jean-Luc spotted the gap in television rights for leagues and clubs a level below the most affluent and encouraged NAGRA to do two things: give access to the technology which high-end sport gives to sports which are outside the main four and also access to the lesser leagues for the bigger sports – think cricket in Germany. It means your village football team can get VAR, your student basketball team can post live, multi-camera shots of action in real time and those cricket teams in Frankfurt can broadcast their matches. And, on top of that, they integrated ways to gamify that content to give back to the fans.

“There was the realisation that even if we give a perfect solution to many of our live situation, they may not really be able to use them.”

“We saw that maybe we could start serving the lower end of sport by packaging our technology and services as a one-stop shop,” said Jean-Luc. “But there was the realisation that even if we give a perfect solution to many of our live situation, they may not really be able to use them. We went another step which is to also operate it from a technical viewpoint, but also from a marketing point of view.”

It’s what Jean-Luc and NAGRA have described as ‘sport as a service’. “We tried to create a differentiated position, that also capitalised on all the technology we have in the room,” he said.

“In terms of customer facing it’s great. It’s very smooth app and website and takes all the important work right of what you have to do with the content, not only video but also data. And then in the backend it ticks all the boxes in terms of ability to monetize through sponsors, donors, or video subscription and pay-per-view. And then it’s all in the cloud, it’s super secure means the security is the same as the one we provide to the very top sports leagues,” said Jean-Luc.

NAGRA combines live streaming, highlights and instant replay with monetisation through advertising, subscription and CRM. And the outcomes mean that leagues below that top echelon can benefit from the same technology and potential revenue streams as those in the more affluent bracket.

“For the fans of lower leagues and clubs which are not in the spotlight, they have access to great content and the opportunity to get involved through access, gamification and virtual challenges.”

For the sport it means bridging the gap between elite sport and grassroots/casual practice, better exposure and use of high-end tech at all levels and, importantly, for the fans of lower leagues and clubs which are not in the spotlight, they have access to great content and the opportunity to get involved through access, gamification and virtual challenges. And the latter, entertainment around the sporting event can lead to rewards which encourage and deepen fan engagement. It’s a win for the clubs, a win for the sport and a win for the fans.

And, as well as the big leagues, who wouldn’t want to see VAR be part of Sunday morning village soccer? Exactly.

For more details on NAGRA, check out their website: nagra.sport