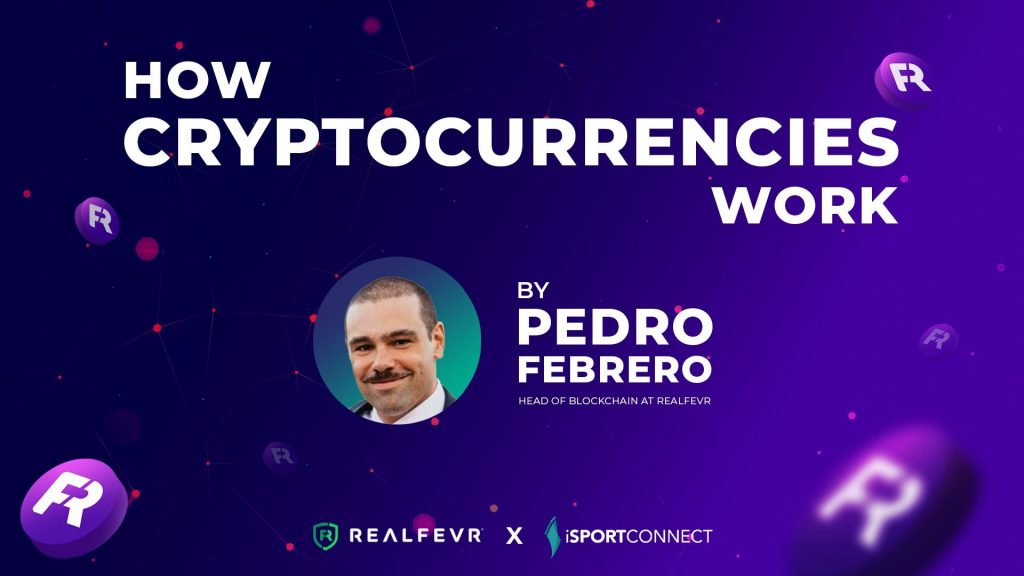 How Bitcoin (And Other Cryptocurrencies) Work

Pedro Febrero, Head of Blockchain at RealFevr dives deep into bitcoin and blockchain technology and discusses the power of smart contracts and how these technologies can be adopted by the Sports and eSports industry, enhancing clubs, companies, fans and every single individual operating in the space.

Bitcoin was the first cryptocurrency that ever existed and the catalyst for developing the plurality of blockchain technology projects we see today. Without bitcoin, there would be no blockchain.

Bitcoin is also a network and a protocol, as much as it is a currency, which makes it even harder to understand. It’s a way for anyone in the world to send a message that contains financial information.

There are core technologies that the Bitcoin protocol uses, which we think are critical to fully understand before we move forward into how the blockchain and cryptocurrency will revolutionize the sports and Esports industries. The most important are:

The power of blockchain and smart contracts

Now that you’ve understood why bitcoin is unstoppable, you may extend that into other areas related to cryptocurrency, namely smart contracts.

Not only that, but anyone can run nodes that contain those smart contracts and the entire history of the blockchain. Therefore, what are the main advantages of blockchain and smart contracts?

While there are many critical advantages for the use of smart contracts and blockchain technology in various industries, we argue that no other field will benefit as much as Sports and eSports. Let’s discuss why.

We’ve previously discussed how bitcoin works and why it empowers its users. Next, we’ve seen the advantages of using blockchain and smart contracts. Now, we’ll finally dive into how both technologies are changing the face of the Sports and eSports industries forever.

According to Statistica, the global sports betting industry surpassed $203 billion in 2020 alone. Not only that, but by 2024, there are expected to be 577.2 million viewers of Esports worldwide, a significant increase from the 397.8 million in 2019. This is an enormous market that blockchain can streamline with cost and efficiency thanks to the nature of the technology.

Furthermore, blockchain has created new revenue streams for teams and clubs while monetizing fan engagement through tokenized teams and loyalty reward schemes. To conclude, right-holders will also benefit from royalties generated through smart contracts and content creators will also see their IP protected by unchangeable code that runs in a decentralized platform.

Also, blockchain is rapidly developing in the collectible and gaming worlds, pushed by organizations like RealFevr that are currently building the next-generation fantasy games and collectibles marketplaces.

To go further down the rabbit hole, we would like to take a more expressive look at some of the most critical use cases, ones that RealFevr is developing, that will have an immediate impact on how both industries operate.

Similar to real-life sports betting, blockchain technology has created the opportunity for fans to create and monetize their own fantasy sports teams. Through the use of tokenized assets, fans may soon be able to purchase a non-fungible token (NFT) of their favourite player that could be valued based on performance, for example. Blockchain-based games allow participants to use their NFTs in-game or trade on an NFT marketplace, such as the RealFevr Marketplace coming out soon.

Token leagues have a similar format to Fantasy Leagues, with the main difference being fans are able to wager tokens. Let’s use Real Fevr’s case as an example.

Not only can fans compete in free leagues, but they will also be able to bet tokens, like FEVR, into matches. This way, the competition becomes far more interesting because there is a final prize to win, per round. Still, use-cases do not stop in fungible tokens (ERC20) with a limited use case of fan service.

One of the excellent blockchain use cases in esports and the traditional sports industry is verifiable authentication of memorabilia and collectibles. Organizations and clubs can securely sell merchandise directly to their fans and remove intermediaries. Also, this creates a new way for fans to show their support and commitment to a team.

Additionally, the technology can potentially eradicate counterfeit sporting merchandise and goods. Using blockchain, each branded collectible item or memorabilia can be given a unique digital identity.

However, in RealFevr’s case, it does not stop here. Collectibles can also be used in Fantasy and Token Leagues.

Subscriptions work as a “staking” model, where fans can lock cryptocurrencies during a fixed period to receive periodic NFTs. Let’s dig into RealFevr’s use case.

Fans who wish to receive packs regularly may lock FEVR tokens in a specified smart contract that will award them a fixed number of packs per drop. Hence, instead of waiting in a queue at each drop or avoiding missing packs every time there is a new drop, fans can adopt the subscription model.

The price for each subscription depends on the number of spots available.

A final example of how NFTs are helpful in sports is borrowing and lending digital collectibles, so that fans can use them in-game.

“Instead of waiting in a queue at each drop or avoiding missing packs every time there is a new drop, fans can adopt the subscription model.”

Instead of just selling the digital asset in the marketplace, fans can borrow and lend video collectibles from and to other fans, maximizing their utility.

Adding to the use cases above, we’ve identified a plurality of additional use-cases that will also play a major role in clubs, players, fans and agents involved in the Sports and eSports industries:

Using NFTs, an additional blockchain use case for esports and the sporting industry is digital tickets. Cryptographically and mathematically verifiable, unique, blockchain-based sports tickets mean token fraud could soon be a thing of the past.

There is much detail that goes into creating a player transfer contract. Mandatory in every contract is the breakdown of the players’ rights when signing to a new club.

“Players now have blockchain-backed protection with their club contracts through the use of immutable smart contracts.”

Players now have blockchain-backed protection with their club contracts through the use of immutable smart contracts. Adding to that, it’s much easier to fractionalize one’s contract through NFTs and cryptocurrencies.

Introducing blockchain technology in the sports industry brings with it increased transparency and liability. Any medical data provided to a blockchain is immutably stored, meaning it can not be altered or removed. Different types of medical data could be stored between public and private blockchains. This would protect an athlete’s data, but additionally, be publicly transparent about any test results.

This would increase the honesty and liability of players as it would be near-impossible to cheat or lie about drug test results. Only if a player managed to tamper with the result before it being appended to the blockchain could this technology provide inaccurate information.

Like players’ rights and doping management, another blockchain use case in the sports industry is storing and viewing player analytics. Through immutable smart contracts, multiple data types about a player can be stored in one convenient place.

Moreover, this information could be accessed publicly or securely, using a private key given to potential employers or sponsorships.

Cryptocurrency and blockchain is rapidly becoming critical technology in various fields. Sports and eSports will soon enjoy massive gains with the adoption of both technologies.

With blockchain technology and smart contracts, it’s possible to decentralize and remove middle-man, as well as to give power to network participants in a simple form: by entitle them to rewards such as cryptocurrency or digital collectibles (NFTs).

Not only that, but other protocols will enable commerce to develop around these digital assets, greatly empowering its owners.

RealFevr is connecting all the above technologies with the best fantasy football app built to date. We believe that this nouveau and next level game architecture will be the catalyst to a cambrian explosion of new types of applications that shift the incentives from the platform, to the user.