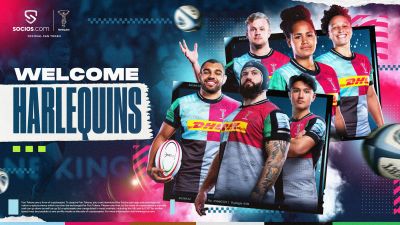 Socios.com, a blockchain provider for the sports industry, is today announcing a new partnership with Harlequins, Saracens and Leicester Tigers.

This marks its latest expansion into a new sport as it continues building its global ecosystem of fans from teams and organisations from some of the biggest sports in the world.

The new Harlequins Fan Token will be accessible via Socios.com’s fan engagement and rewards platform, providing Fan Token holders around the world with an array of rewards, new opportunities for engagement through polls, greater access to their club and its players, and a community where they can build networks with other fans.

The Socios.com platform is designed to allow clubs to reward fans for engaging and supporting their team.

The rewards and experiences set to be provided by the new rugby union Fan Tokens include being able to enjoy dressing rooms tours and enjoy a match on the team bench. They can also attend a training session with the squad, conducted by First Team Coaches.

Other rewards range from meet-and-greets with players to training ground tours across the season, all aimed at bringing Fan Token holders closer to their club. Socios.com and Harlequins have already started engaging with key fan groups around the new Fan Tokens and will continue liaising with fans and Fan Token holders in order to provide clubs with a new way to reward and engage their fans.

There are currently 1.5 million fans from over 160 countries using Socios.com to connect with and be rewarded by their favourite clubs. Other sports teams and organisations with Fan Tokens include Manchester City, AC Milan, Juventus, FC Barcelona, Aston Martin and the Davis Cup.

As part of the announcement, Season Ticket Members from each rugby club will be given a free Fan Token to start to enjoy the benefits of the token-gated community. Fan Tokens will be made available through a fixed initial Fan Token Offering (FTO) price of £2 at the end of August, at which point clubs will launch a tiered community of benefits and rewards.

Steve Morton, Chief Commercial Officer of Harlequins, said: “We’re always looking for ways to offer more to our supporters and these new Fan Tokens will play an important role in engaging a growing global supporter base. We’re committed to working closely with Socios.com to bring supporters, no matter where in the world they live, closer to the game via rewards and experiences, in conjunction with our existing Member loyalty programme, as well as speaking to our supporters directly to continue building an offer that brings them closer to the Club.”

Alexandre Dreyfus, CEO of Chiliz and Socios.com, added: “Launching in a new sport is always a big moment for Socios.com and the growth of the platform. The wider rugby community comprises some of the most passionate sports fans around. It has long been an ambition to launch in this area and between Leicester, Harlequins and Saracens, we are partnering with three of the best-known and best-supported rugby union sides. We are looking forward to working with these teams to offer a differentiating way of engaging with their fans.

“More broadly, we’re excited to add three more leading clubs to our platform’s multi-sports ecosystem, as we continue building an offer for fans of clubs and organisations in the world’s biggest sports. We have further updates and developments ahead for Socios.com as we look to expand and enhance our tokenised system of fan engagement, access, community and rewards.”