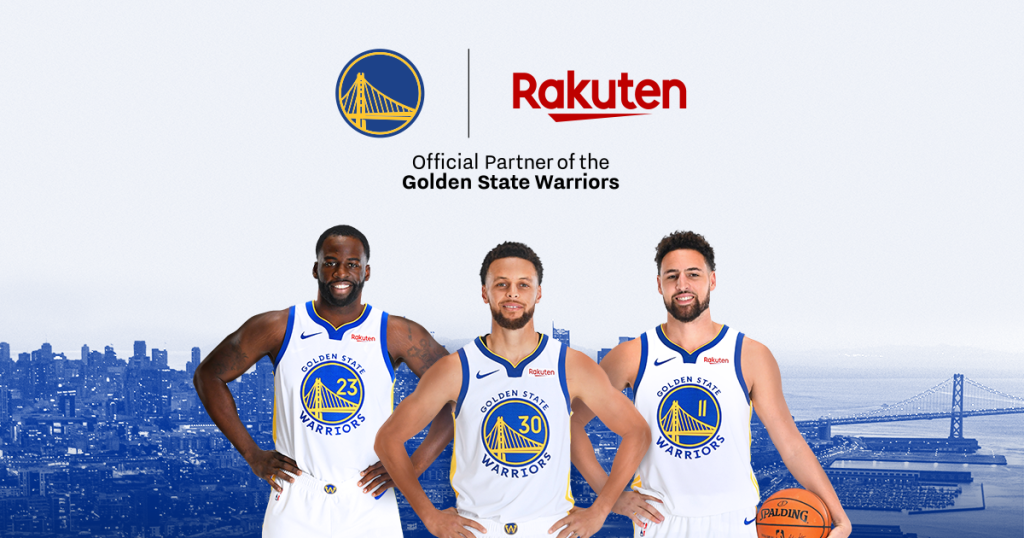 The Golden State Warriors and Rakuten Group, Inc. have renewed their historic multi-year partnership, maintaining Rakuten’s status as official jersey badge partner of the Warriors. Over the last five seasons, the Warriors jersey badge has been a key contributor to the explosive growth of Rakuten’s U.S. consumer brand recognition derived from broadcast, digital and social media impressions. In the new extended term, Rakuten’s logo will continue to be featured as a badge on all Warriors uniforms as it has since 2017 when the Warriors welcomed Rakuten as their first-ever jersey badge partner.

“Since the inception of our momentous partnership, Rakuten has proven to be an incredible partner,” said Warriors President and Chief Operating Officer, Brandon Schneider. “Our relationship is steeped in mutual respect, aligned values and a strong drive to innovate. Over the last five years, we have reached historic milestones through enhanced player and fan experiences around the world. As we embark on the next phase of this partnership, we will continue to introduce and drive Warriors fans’ awareness of Rakuten to enhance their shopping experience. We look forward to providing more historic moments and engaging experiences for our fans worldwide.”

“The Warriors exemplify the best of innovation, teamwork and optimism, all of which align with our core values,” said Amit Patel, Chief Executive Officer at Rakuten Americas. “We are proud to partner with a world-class organization like the Warriors that has used unusual creativity and excellence to become one of the world’s most recognized brands. We are excited to continue our work together to grow, engage and reward our communities.”

The renewal will see expanded media and brand integrations, such as enhanced Rakuten signage in Chase Center and infusion in new digital, social, radio and live activations, including as presenting partner of game-day player arrivals on the ‘Rakuten Runway.’ Beyond Chase Center, Rakuten will be featured prominently in game broadcasts and at the Warriors Shop.

Rakuten will continue its involvement in Warriors jersey platforms and launches, with exclusive apparel collaborations and unrivaled shopping experiences. Through the duration of the partnership, fans who are Rakuten members will be eligible for a minimum of 10% Cash Back on purchases of Warriors gear at the Warriors Shop. Fans can also look forward to gameday items and Rakuten-exclusive promotions on specialty Warriors gear and apparel.

As part of their continuing relationship, a Rakuten executive will join the Board of the Warriors Community Foundation to collaborate on initiatives in support of educational equity in the San Francisco Bay Area. Rakuten previously partnered with the Foundation on projects such as refurbishing basketball courts at Oakland’s McClymonds High School and San Francisco’s City of Dreams.