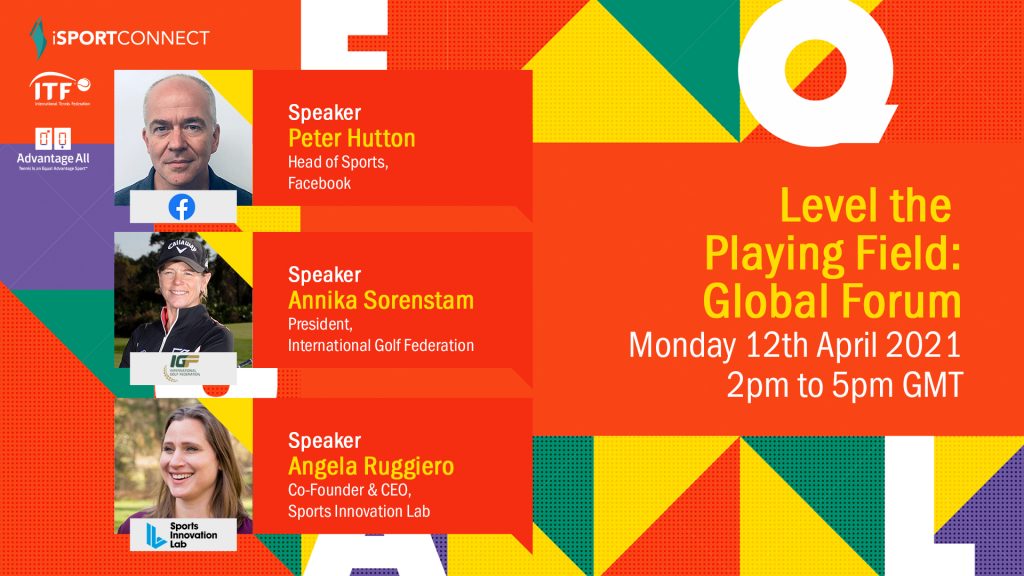 iSPORTCONNECT and the International Tennis Federation are thrilled to reveal the three latest speakers for the upcoming Global Forum ‘Level The Playing Field’, taking place on Monday, April 12th between 2-5pm BST.

We will be joined by representatives from three terrific organisations; Facebook, the International Golf Federation and Sports Innovation Lab, with more to be unveiled in the coming weeks.

This joint event, hosting by the International Tennis Federation and iSPORTCONNECT, will bring together influential and inspirational individuals from sport and business to debate and advance gender equality through proactive, solution focused discussion.

It also forms part of the ITF’s Advantage All gender equality strategy, created in order to further tennis as an equal advantage sport where everyone is provided the same advantage and opportunity, both on and off the court.

Peter joins our second panel, ‘See it to Be it’, which will be looking at the portrayal of women in the media, and the lack of female role models.

A combination of Facebook’s insights from its platform, and the research commissioned by the ITF into this area through Ipsos MORI, will offer a true representation of where we currently are as a society.

Peter’s accomplished career has travelled across the globe and a variety of roles, including working for IMG in India and in 2002 founding the Ten Sports channel in Dubai, which was sold to Zee TV in 2010.

Following his time with News Corporation, where he helped launch the international Fox Sports business, he worked as CEO at sports agency MP & Silva and then subsequently as CEO of Eurosport.

Annika joins Peter on the second panel, ‘See it to Be it’.

A legendary golfer in her own right and winner of ten LPGA Major Championships during her career, Annika was most recently named as President of the International Golf Federation at the beginning of 2021. Her global, on-course success and knowledge of business helped her become the first and only female golfer to create a successful brand of businesses, as well as her foundation.

Angela joins the first panel, ‘Change the System’, which will be exploring the barriers in the place for women entering sport and the administration of sport, and what we can do to ensure women can reach leadership positions.

Angela has been recognised as a SBJ 40 under 40 recipient, Forbes Top 25 most powerful woman in sport, and Top 100 Most Influential People in Hockey. She is also a four-time Olympian and Gold Medallist in Ice Hockey and was the first female non-goalie to play in a men’s professional hockey league in 2005 with the Tulsa Oilers.

With more speakers to be announced over the coming weeks, we encourage all leaders from within sports to join us for this event to understand how and where they can make impactful change within their organisations.

Please do contact our Community Manager, Bethany Hushon at bethany@isportconnect.com if you are interested in joining, and joining details will be shared.