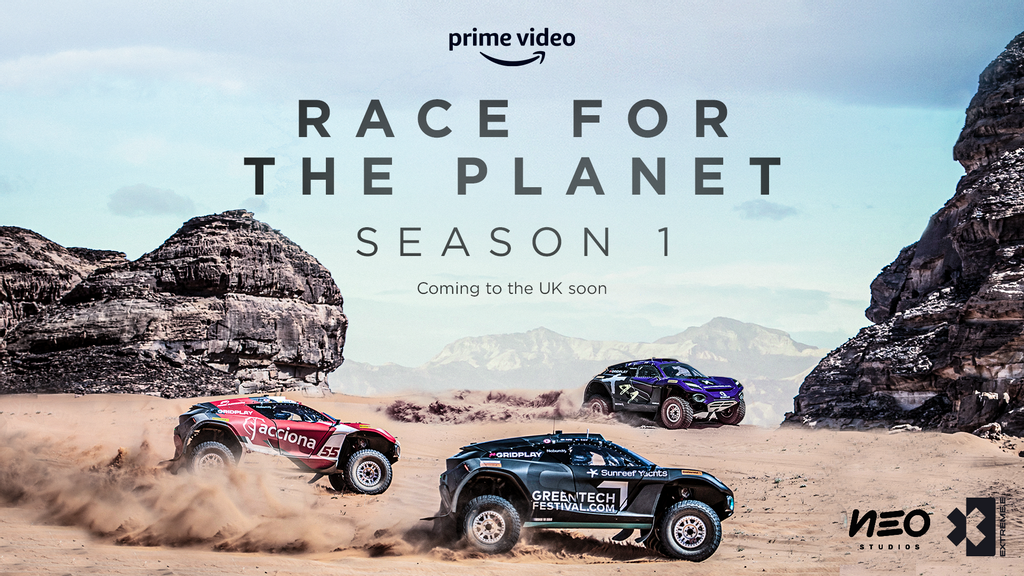 The inaugural season of the pioneering Extreme E racing series has been captured in a new documentary, set for release on Prime Video in the UK and Ireland coming soon early Summer of this year.

‘Race for the Planet’ is a five-part docu-series giving audiences a comprehensive look at Extreme E’s 2021 season and the climate change story that underpinned it. The show has been executive produced by the sports production company NEO Studios.

There were five races in total across 2021, taking the drivers from the Saudi Arabian desert in April to Dorset in the UK in December. NEO Studios’ crew were with the teams on each leg of the journey to tell the story.

“The idea of Extreme E is so bold and exciting, and what we have is really the ultimate account of the competition’s first campaign. The series not only documents an incredible season of racing in some of the most extreme conditions imaginable – but also shines the light on some remarkable human stories. We are excited to be partnering with Prime Video to get the show to audiences later this year.”

Audiences will see the 2021 season unfold through the eyes of the drivers, teams and support staff. As well as capturing the drama of race days – from spectacular off road action, to blistering crashes – the show will tell the stories of its stars, and the organizers who made it happen in the face of the pandemic. The series also sheds light on the consequences of climate change in each race location.

“We are absolutely thrilled to announce our new documentary ‘Race for the Planet’, highlighting the untold stories behind the scenes of Extreme E on and off the track, taking audiences along with us as we race in the most remote locations of the planet.

“We have captured what it is like to race and breathe Extreme E. We break down the barriers, bring authenticity to displaying the ups and down of motorsport, the challenges and essentially, how gladiatorial Extreme E is. Listening into the intimate thoughts of some of the best drivers in motorsport makes this documentary even more exciting and entertaining.

“Working with Prime Video was the perfect way to release this original documentary to showcase Extreme E as pioneers and a sport for purpose Championship. Not only will ‘Race for the Planet’ bring our fans and viewers into the heart of our racing and legacy projects, but this documentary will also attract a new audience to Extreme E.”

“Seeing ‘Race for the Planet’ gave me goosebumps. I could feel myself getting nervous again with my heart beating faster as we were sat on the start line because it brought back so many memories for me. It’s really nice to have some time to reflect on last season and see the behind the scenes of other teams’ to understand what goes on as well as the life stories behind each individual athlete, which we would never normally see. I think that Extreme E has done it in a great light with lots of humour and competitiveness.

“It’s really important to see the legacy work that happens as well and how that combines with the racing in a really clear and simple way that all fans will understand. I’m looking forward to it coming out and I hope the fans enjoy it.”

Race for the Planet Episode Synopsis