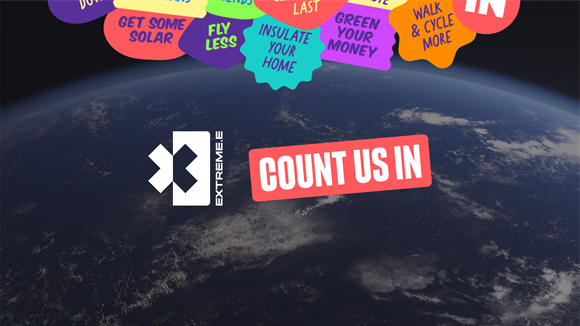 Count Us In Extreme E

Following its success in 2021, the Extreme E Count Us In Challenge is back for Season 2 with fans once again urged to take action on climate change through their passion for the sport.

The unison between Extreme E and the global initiative Count Us In, first announced in 2020, encourages fans to use the collective power of their individual action on climate, inspiring them to take one or more impactful actions from a set recommended by the campaign. The goal of these actions is to show that committing to small lifestyle changes, like eating more plant-based foods walking and cycling more, and reducing energy consumption at home, has a huge, positive impact when multiplied on a global level.

Each action, represented as a step on the action platform, is attributed to the fans’ favourite Extreme E team, and the team with the most steps at the end of the Season wins the Extreme E Sustainability Award. Count Us In uses a range of data sources to add up the carbon savings of people’s actions. The wider implications of which can therefore urge governments, cities and businesses to accelerate progress and increase their ambition on climate action.

“Our first season working with Count Us In was a huge success – and it was fantastic to see just how much fan engagement there was which further underlines the power of our sport. We are fortunate to have a phenomenal platform and it’s important we use it in the right way and that is, not only to entertain, but also to educate. And initiatives like Count Us In allow us to magnify our message and facilitate quantifiable change that really makes a difference.

“We are really looking forward to building on this momentum for Season 2 and with the help of our incredible line up of teams, drivers and dedicated fan base, we aim to go even further in taking action on climate change.  At Extreme E we will continue to push the boundaries and shine a spotlight on the issues we face, along with the need to act now to help protect our futures.”

On being presented with the 2021 award, X44’s Sébastien Loeb said:

“I was very happy that X44 won the Extreme E Sustainability Award for 2021. I joined the team hoping to discover more about the environment while doing what I love, and I have learned so much from the series and the different places we visited – in fact I even bought my first electric car last year!”

“I’m delighted to see the Extreme E Count Us In Challenge grow from strength to strength. To avoid the worst effects of climate change, we need everyone’s involvement – from businesses and governments to citizens and communities, we all have a critical part to play. People all over the world taking impactful actions, like talking to friends or using their voting power, and taking on some simple lifestyle changes, is a fundamental part of demonstrating to companies and governments that our whole society is in the Race to Zero emissions.”

In 2022, McLaren XE also joins the line-up of existing Extreme E teams in the quest for this year’s coveted award. The team, who announced its entry into Extreme E last year, join the championship as part of its move to minimise negative impact and achieve net-zero carbon footprint by 2030.

The sport for purpose championship continues on it’s voyage touching ground in Sardinia for the double header before moving onto South America – Chile and Uruguay.

Count Us In Extreme E