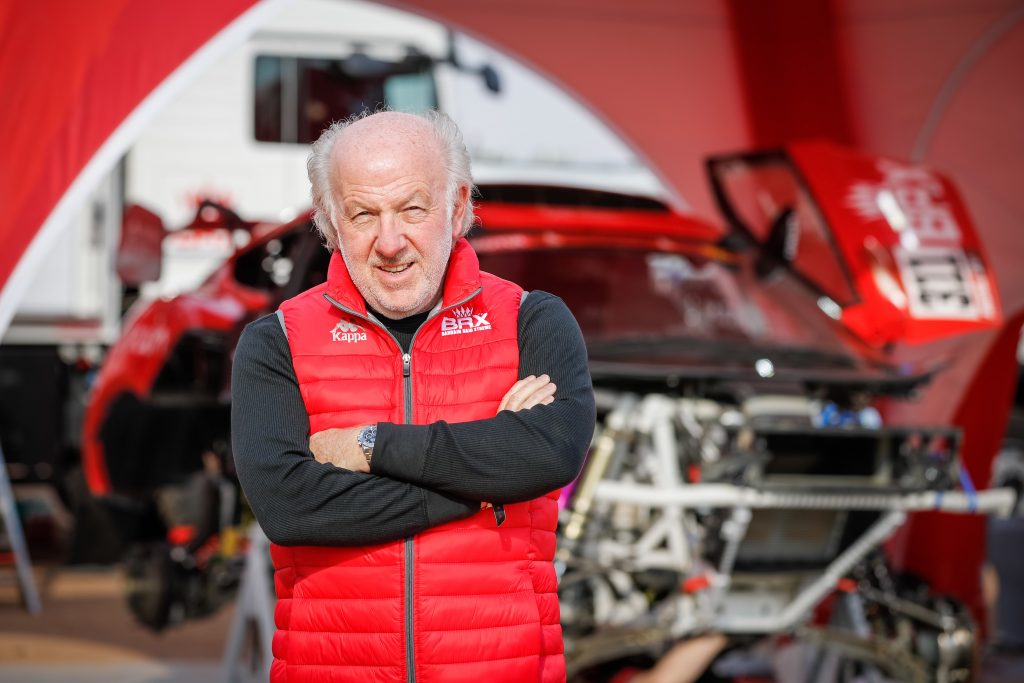 Bahrain Raid Xtreme is the new team to enter the Dakar Rally – one of the world’s most extreme sporting events. The project is the product of a joint venture between the Crown Prince of Bahrain and leading UK motorsport group, Prodrive. David Richards – BRX Team Director and Motorsport UK and Prodrive Chairman – is leading the project. iSportConnect spoke with him exclusively about how everything has been built from scratch – team, car, as well as all commercial partnerships among other things.

How is the organisation [Dakar Rally] tackling the Covid19 challenges?

I must admit that the biggest challenge here has been for the organisers themselves who have done the most remarkable job of managing to get the event off the ground in the first place. Everyone who flew out of Europe was tested before arriving in the Middle East and was again tested on arrival. We are all working in the COVID bubble and lots of processes are in place to protect everyone and that has been for me the most impressive thing about the whole organisation has managed to cope under these circumstances.

“We created a concept and a business plan for 5 years to not just participate in Dakar, but to build number of cars for private competitors, to produce derivatives from the car and potentially a road car as well.”

Why did you choose this year to enter the Dakar Rally ?

We have been working on this project for two years. Our company of course has organised several motorsports events globally for different categories. There has never been really the right timing or opportunity to do Dakar and it has always been on the agenda but never quite the right time.

Two years ago, when we started to look at it more seriously, we decided to design a car and we engaged in a conversation with the Crown Prince of Bahrain who was quite welcoming. Hence, we created a concept and a business plan for 5 years to not just participate in Dakar, but to build number of cars for private competitors, to produce derivatives from the car and potentially a road car as well.

How have the fans been receiving it?

Dakar has performed exceptionally and well beyond everyone’s expectations.  This is the event which is regarded as the most challenging motorsport event in the world. It is like ‘Marathon des Sables’ which is held in the Sahara Desert and if Formula One is the 100m sprint then Dakar is ‘Marathon des Sables’.

The motorsport landscape has changed over the last 20 years. Most sports have been packaged for TV audiences fixing with the attention span of the viewers. However, what we have lost is the sense of adventure, a sense of outside spaces and I think now during the pandemic when most of us have to stay indoors, the idea of watching a race across desert and roads is something that really appeals to people, and the interest has grown staggeringly among the TV audiences. They see it as something adventurous and exciting and the fan base is growing extensively.

Give us an insight into building a team from scratch, how did it all come together?

We had the wonderful opportunity to build Bahrain Raid Xtreme from scratch – the car, our brand, our partners. It has all come together for our first journey into the Dakar.

We have experienced wonderful engagement within the Dakar community , as well as an enormous amount of support from the Saudi people, who are very welcoming.

We have a fantastic suite of commercial partners – from technology brands, to motorsport and local Middle Eastern companies who have started engaging with our team and see the benefits of working alongside the team to promote their interest in the region.

“The sporting attitude which has been lost in so many other sports is the main feature of the Dakar, that’s what makes it such a special event.”

Our principal partner is Bahrain itself which is a close ally of Saudi. We have other important partners as well like Red Bull, Samsung, Bardahl and IIG as well as the likes of Land Rover who is working with us on the support vehicles, as well as our technical partners. Each partner plays a vital role in ensuring the BRX cars, drivers and team are ready to compete in one of sport’s biggest tests of endurance.

What makes the Dakar Rally so special?

The camaraderie among the drivers here at Dakar is amazing. The winners from last year were over for lunch the other day. The sporting attitude which has been lost in so many other sports is the main feature of the Dakar, that’s what makes it such a special event. Alongside some of the most beautiful landscape that Saudi Arabia has to offer – desert, dunes, mountains and coastlines – the views are spectacular.

Do you reckon the event will further boost tourism in the region?