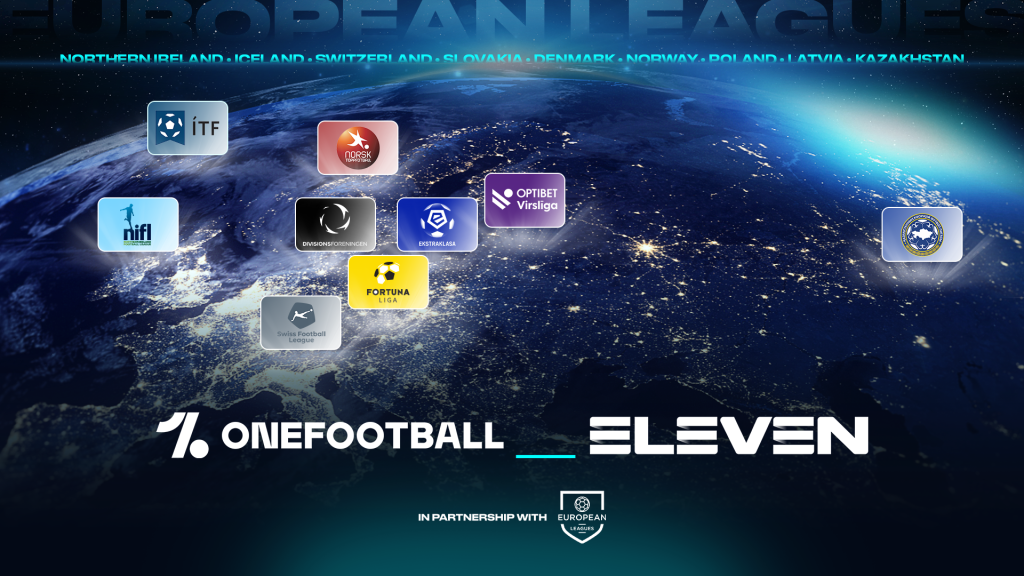 ELEVEN and OneFootball will broadcast live matches and highlights from nine European professional football leagues across the world in a landmark collective deal with The Association of European Professional Leagues (European Leagues).

For the first time ever, European Leagues worked with nine of its members to bundle their broadcast media rights outside their domestic markets. Thanks to the joint initial three-year deal with ELEVEN and OneFootball, football fans around the world will be able to view top-tier matches live and for free from the following professional leagues: Danish Superliga, Icelandic Top Football, Professional Football League of Kazakhstan, Latvian Optibet Virsliga, Northern Ireland Premiership, Norwegian Eliteserien, Polish Ekstraklasa, Slovak Fortuna Liga, Swiss Super League.

Chris Gerstle, Head of Business Development and Knowledge Centre for European Leagues, told iSportConnect earlier this year: “We believe a centralised international media rights offering of multiple, top-tier European professional football will increase opportunities for fans to engage with leagues they may have previously been unable to view due to archaic media agreements and outmoded forms of program distribution.

“The breadth of league rights included in this RFP will also better enable fans to follow players from their respective home markets that play professionally in Europe, often moving between leagues and clubs.”

This new strategic partnership will allow fans worldwide to view year round “non-stop” free-to-air live action, with matches delivered from both winter and summer leagues including regular UEFA Champions League participants such as FC Copenhagen, BSC Young Boys, and Legia Warsaw. Live matches will be available across select ELEVEN linear channels, and the ElevenSports.com and OneFootball platforms, and will be complemented by shoulder programming, highlight clips, archive material, and editorial.

On top of securing guaranteed international broadcast revenues, for the first time these nine leagues and their clubs will be able to reach their existing passionate fans wherever they are. By showcasing both the elite football talent in their competitions and their highly competitive championships, leagues and clubs will also find new supporters by tapping into the huge audiences across the globe that OneFootball and ELEVEN afford.

The partnership kicks off this weekend with live matches from six leagues, including Professional Football League of Kazakhstan, Northern Ireland Premiership, Norwegian Eliteserien, Polish Ekstraklasa, Slovak Fortuna Liga, and Swiss Super League. The structure of the agreement will allow further members of the European Leagues to easily join the partnership at any time.

Jacco Swart, Managing Director, European Leagues: “It is fantastic to see this international media rights partnership happening between 9 members of our Association and ELEVEN and OneFootball.  It represents another innovative example of how we at the European Leagues aim to provide valuable services to our member leagues. We are uniquely positioned to take advantage of opportunities such as these and we will continue to support the development of our members in relation to league business development. I’m excited about how we can leverage both the ELEVEN and OneFootball platforms to amplify the international reach of our member leagues and their clubs. Our intention is for sure to increase the number of participating leagues over time and to keep on exploring new business areas so as to collaborate with the companies we partner with in the most mutually beneficial way and grow the relationship over the long-term.”

Pedro Presa, Chief D2C Officer, ELEVEN Group: “We’re so excited to bring this fantastic offering of top-tier European leagues to our pioneering ElevenSports.Com platform. We want to deliver for fans who were previously unable to watch the teams they love play and we want to give all football lovers the chance to discover new leagues and players. This new deal enables us to deliver on that mission in a big way via OTT, linear distribution, and original content, and we can’t wait to get started.”

Nikolaus von Doetinchem, VP OTT & Media Rights, OneFootball: “OneFootball is thrilled to be part of such a ground-breaking deal, setting a new precedent in the wider football media rights industry. This deal provides obvious benefits to fans around the world who will now have access to a huge range of live action at their fingertips, for free. Partnering with OneFootball gives these nine leagues and their clubs an unprecedented global audience and we are convinced that many other leagues will see the benefits of agreements like this over the course of this season and beyond. We look forward to getting started this weekend.”