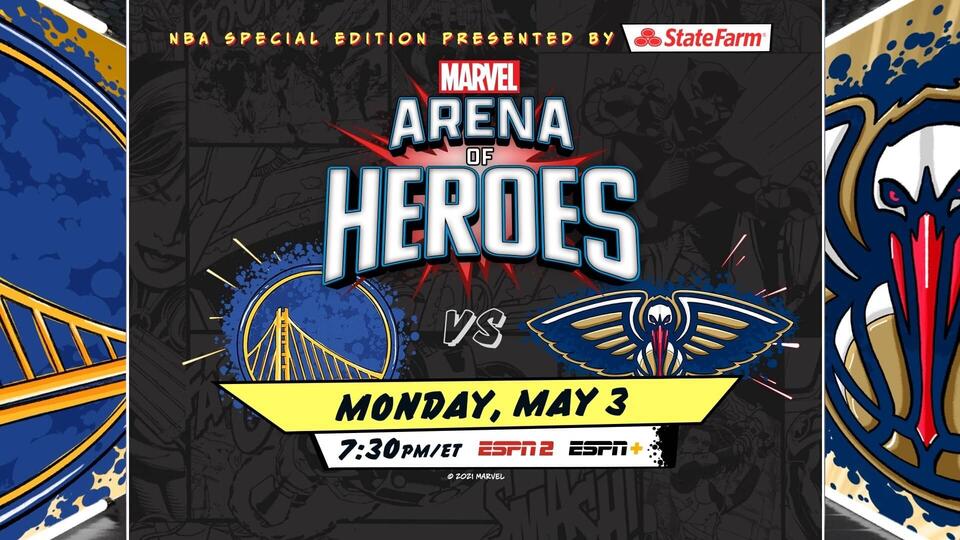 ESPN and Marvel are collaborating to launch the first-ever Marvel-inspired alternate presentation for the Golden State Warriors vs. New Orleans Pelicans game on Monday, May 3.

After a narrow victory over an invading alien army, the Avengers receive an ominous threat from the enemy who vows to return in greater numbers and force. The Black Panther and Iron Man quickly realize they will need more help and form a plan to expand their ranks to fight this impending threat. Recognizing the superior physical abilities, agility, and tenacity of Earth’s greatest athletes, the Avengers will hold a series of contests where the winners earn the right to train and fight alongside them as Marvel’s Champions! The Avengers will begin their recruitment with the NBA elite and observe the battle between the Warriors and the Pelicans, focusing on three star players from each team.

“We’re eager for fans to experience this unique, innovative presentation that will pair Marvel and ESPN’s exceptional storytelling and production,” said Matt Kenny, ESPN vice president, programming and acquisitions. “We are proud to showcase the ‘larger than life’ abilities of these NBA stars in a manner in which only Disney and Marvel can deliver.”

“Marvel and ESPN have brought the worlds of sports and Super Heroes together for years through comics, documentaries, and other stories celebrating athletes and their extraordinary abilities,” said Mike Pasciullo, vice president, marketing and communications, Marvel Entertainment. “The new Marvel’s Arena of Heroes telecast will be the first of its kind to bring Marvel’s storytelling directly to the real-time experience of a NBA game, and we are excited for fans to be able to watch their favorite players through the lens of Marvel’s mightiest heroes.”