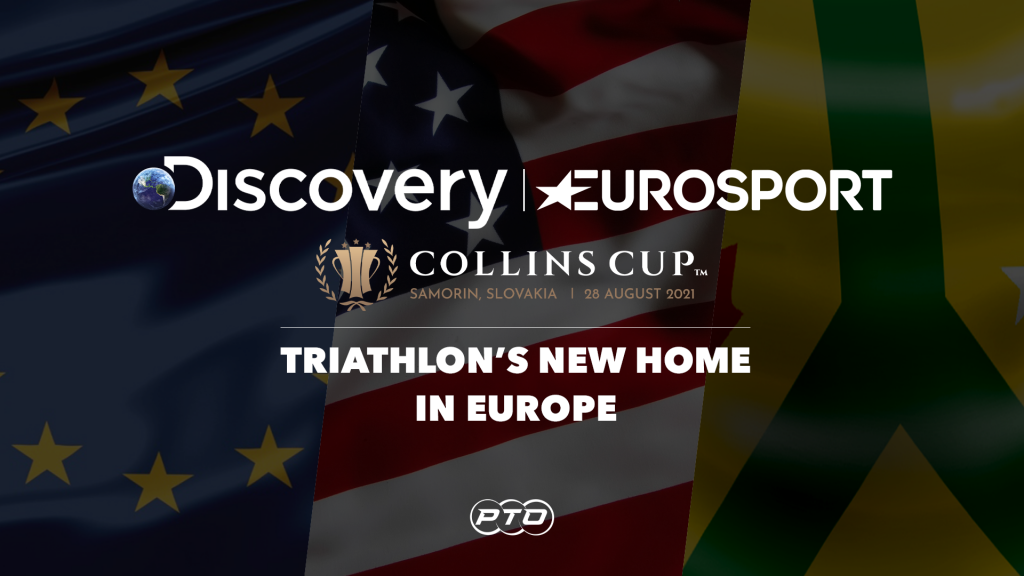 The Professional Triathletes Organisation (PTO) and Discovery have agreed a new partnership that will see the Collins Cup screened exclusively across Europe through Eurosport, Discovery’s leading multi-sport brand.

The Collins Cup is the PTO’s inaugural flagship event taking place on 28th August in Šamorín, near Bratislava, Slovakia and is a new race format modelled after the Ryder Cup, which will see teams of International, European and USA athletes pitted against one another and put on display the excitement, rivalry, drama and personalities of the sport of triathlon.

As part of the one-year deal, with an option to extend for a further two years, Eurosport will show the race action, live and on-demand, in 20 languages. Core coverage, including shoulder programming, will span across Eurosport 1 and 2, and via the Eurosport App and discovery+*, with a two-part documentary available to stream via discovery+. The entire Collins Cup broadcast of over 7 hours will air live on Eurosport 2 and simulcast live on the Eurosport App, with highlights aired on Eurosport 1 the following day. The Collins Cup has also secured highlights and live coverage via Eurosport across Asia Pacific with highlights distribution in India.

Significant shoulder programming, including two Collins Cup countdown shows, will be aired across the Eurosport App to preview the biggest stories and key battles ahead of the live event. Two days before the live racing takes place, viewers will be able to stream the Collins Cup draft show live from Šamorín where Team Captains will pick athletes for each individual match up.

Human documentary produced by Noah Media Group, which follows the journeys of three of the biggest names in the sport – Lionel Sanders (Team Internationals), Sebastien Kienle (Team Europe) and Heather Jackson (Team USA) in their quest to see who rules triathlon.

Scott Young, SVP Content and Production at Eurosport, said: “With the PTO’s commitment to, and investment in, the highest production standards and athlete storytelling combined with Eurosport’s deep sports expertise, we will create a unique narrative and unlock the true power of the sport of triathlon for all to enjoy.

“Our commitment to this event will ensure you see every live moment of the event across our platforms. Through discovery+, we are increasingly focussed on the crossover between sport and real-life entertainment and our partnership with the PTO will mean we can showcase some of the most compelling stories to the widest possible audience.”

Tim Godfrey, Chief Marketing Officer at PTO, said: “The PTO’s mission has always been to put the greatest triathletes in the world on display. The Collins Cup is a first-of-its-kind global competition which will see teams of Europe, International and USA, comprising some of the world’s best athletes, competing head-to-head to determine which region dominates the sport of triathlon. The Collins Cup is poised to be the most exciting and innovative format for endurance sports and Discovery is perfectly suited to showcasing this across its network engaging not only triathlon fans but general sports fans who crave the rivalries that will be put on display when the best athletes in the world enter the arena to do battle for the Collins Cup.”

Discovery and Eurosport will tell the stories of elite triathlon all year round. In the build-up to the Collins Cup, as the Home of the Olympics in Europe, Discovery and Eurosport will bring every unmissable moment from the Olympic Games Tokyo 2020 to viewers across Europe**, including live and uninterrupted coverage of the men’s and women’s triathlon, and the new triathlon mixed relay.