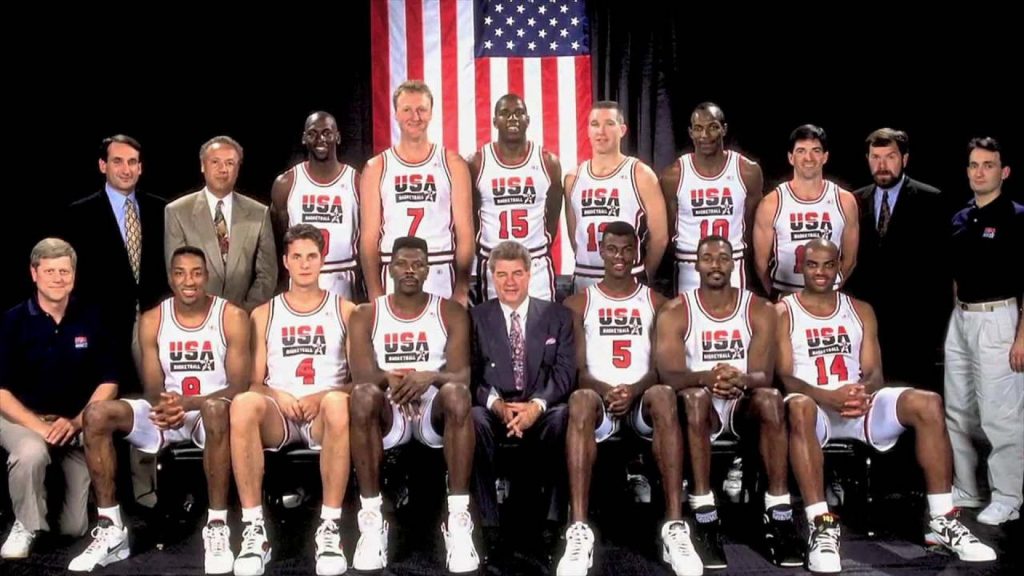 It seems like ancient history. Because it is ancient history, back in the last century. But I think the defining moment of the late David Stern’s career, his finest hour, came in 1992, when the Dream Team took part in the Summer Olympics in Barcelona, the first time that NBA players competed in the Games.

The observation has a personal dimension for me. At the time, I was tracking the story as part of producing Naked Sport, a six-hour TV documentary on the U.S. sports business for Channel 4 and Showtime, a follow-up on a successful show called Naked Hollywood. In truth, we were a bit early with the concept because the sports biz at that time was a few years away from being the global entertainment juggernaut that it has since grown into, one that has indeed eclipsed Hollywood in some ways. But the key moment in becoming truly ‘global’ may well have been that summer, when we filmed with Stern and his top executives during the Tournament of the Americas, the Olympic qualifying event, in Portland, Oregon.

It was no coincidence that the tournament took place in Portland, the home of Nike, the main sponsor of Michael Jordan, the Dream Team’s mega-star. Putting Jordan, Larry Bird, Magic Johnson, Charles Barkley and other stars together on the Olympic stage gave the NBA and Nike a ready-made global platform that they could not possibly have built themselves. By the same token, the presence of the U.S. hoop stars added much needed glitter to the Olympics at a time when the Games had not yet regained their mojo after the boycotts of the 1980s. It was the perfect win-win (and naturally the Dream Team duly won-won-won).

The launch of the WNBA as the first full-blown women’s major league four years later was another defining decision during Stern’s tenure, which spanned a transformation of the NBA. And I do mean transformation.

To step back even further into the dim past, it will probably come as a surprise to many readers that when he became NBA Commissioner in 1984, the league was still emerging from a period of struggle. In Reagan’s America of the early 80s, the NBA’s image was at its nadir, with a lot of finger-pointing at purported drug abuse by players. Let’s cut right to it. The essential problem was racial and cultural. The NBA was seen as ‘too black’ to appeal to the broad American audience. Indeed, there came a time when the NBA Playoffs were not even carried live on network television.

Commissioner Larry O’Brien had begun to turn the situation around with Stern as the league’s top lawyer before the latter took over at the helm himself. They saw the cultural aspects perceived as liabilities by some people as great assets. Yes, the players in the NBA were largely African-American, proudly so, with all the engaging benefits of that in music and fashion and sheer street cred. What other sports property in the world showcased such athleticism? What other league was also a lifestyle brand?

With hindsight, maybe the pivot seems more obvious now. But it was bold and imaginative. The talent and charisma of Michael Jordan (and Nike’s influence) certainly helped the process of re-invention. He was genuine. No spin guru can manufacture that kind of authenticity. Young fans have unerring bullshit detectors. When Nike encouraged them to ‘Be Like Mike,’ the star himself made it an easy sell. And then along came LeBron… Some leagues have all the luck − because they make it.

Stern himself came across as genuine too. Maybe it had to do with working in his father’s deli as a kid. Treat people well and you make friends and loyal customers. He knew how important people are to the success of a business, and he gave smart young execs responsibility (his successor as Commissioner in 2014, Adam Silver, was one of them).

The NBA embraced the players as business partners, cultural icons and global ambassadors, and encouraged them to be themselves.

In speaking about Stern back in ’92, Dick Ebersol, the head of sports at NBC, which by that time was regularly showcasing NBA games as well as of course carrying the Olympics, focused on one essential point. “David understands that it’s all about the players.”

The players. Their talents and personalities. The value grows from them. And Stern put the awareness of that in a contract. The collective bargaining agreement that he forged at the start of the 80s gave the players a 53% share of league revenues.

How the NBA embraced the players as business partners, cultural icons and global ambassadors, and encouraged them to be themselves, remains fundamental to the NBA ethos as it continues to engage more fans around the world.

It continues to broaden its appeal too by recruiting talent from around the world in a way that no North American sport has ever done. For the sixth straight season, NBA rosters during the current campaign feature more than 100 foreign players (from 42 different countries and territories).

In Portland in that epochal summer of his Dream Team, we asked Stern if anything kept him up a night. The league had well and truly taken off and was now flying so high, what could possibly worry him? And the Commissioner replied in so many words, what goes up eventually comes down, so you have to be planning for the downturn. Well, it hasn’t happened yet and, given the NBA’s pioneering role in digital innovation, there’s no sign that it’s coming anytime soon, thanks in good part to putting the players at the heart of the proposition.