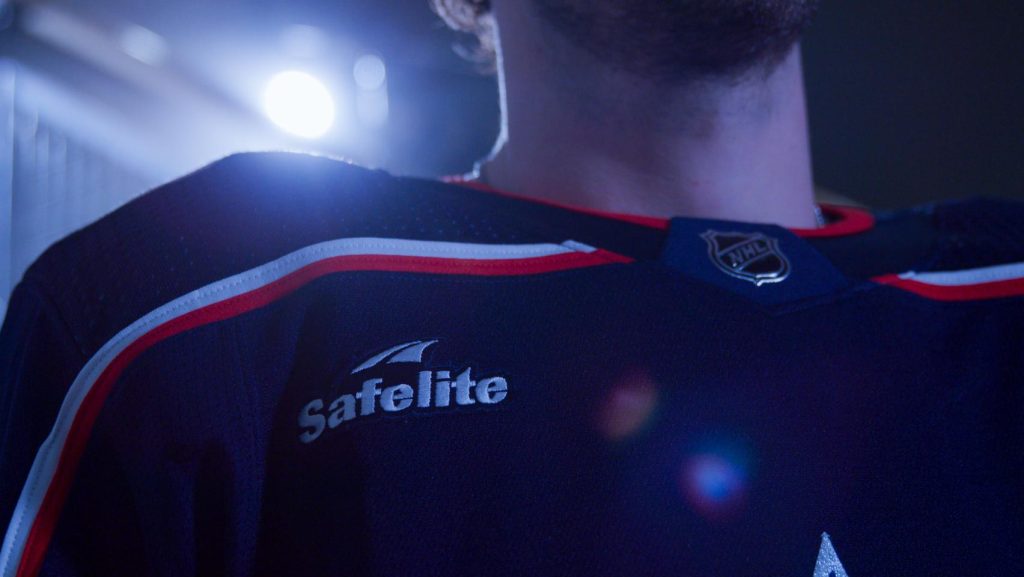 The Columbus Blue Jackets announced today that Columbus-based Safelite will be the first jersey sponsor in franchise history beginning in the 2022-23 National Hockey League season. The Blue Jackets are the first NHL team to announce the sponsor of all three jerseys – home, road, and third – in what is an historic partnership as brand marks will adorn NHL game jerseys for the first time in the League’s 104-year history beginning next season.

Safelite is the nation’s leading provider of auto glass repair, replacement and recalibration. The partnership is a three-year deal that places Safelite’s brand mark as a 3.5″ by 1″ patch located on the upper right chest of each jersey.

“We are excited to elevate our partnership with Safelite into a historic one as the franchise’s first ever jersey sponsor. When we started this process, we set out to partner with a national brand that has strong ties to Columbus and who shares the values we have for serving the community and providing world-class service to our customers. Safelite is just that company,” said Blue Jackets Chief Operating Officer Cameron Scholvin.

Safelite, a partner of the Blue Jackets since 2010, currently serves as the presenting sponsor of the Columbus Blue Jackets Get Out And Learn program that introduces the exciting sport of ice hockey to youth for free in a fun and safe environment.

“Whether on the ice or installing glass, the parallels of providing a memorable experience make this an ideal partnership for Safelite and the Columbus Blue Jackets,” said President and CEO of Safelite Renee Cacchillo. “As the team’s first jersey sponsor, our associates and customers from coast to coast will now know of our valued collaboration.”

The 2022-23 season will be the first for the NHL to include jersey sponsorships following approval by the League’s Board of Governors, last August. The addition of corporate partner brand marks to club jerseys comes on the heels of the addition of helmet sponsorships that began during the 2021-22 season. Last October, the Blue Jackets partnered with Columbus-based DSW Designer Shoe Warehouse as the sponsor of their home blue helmet, and Solon, Ohio-based iDesign on their road white helmet.

The Blue Jackets Corporate Development team utilized the third-party valuation services of notable sports and entertainment firm, Van Wagner, to determine the media value of this groundbreaking opportunity. The rest of the process was managed internally, led by the corporate partnership team, but was the result of a collective effort across the entire organization.

“We knew we wanted to have a clean and consistent look on our jerseys, but it would have to be the right partner at the right investment. We were comfortable with Safelite as the right brand and that we were getting fair market value for both the home and road jerseys, so it made sense to work with just one partner as opposed to multiple partners as we did with our helmets,” said Scholvin.