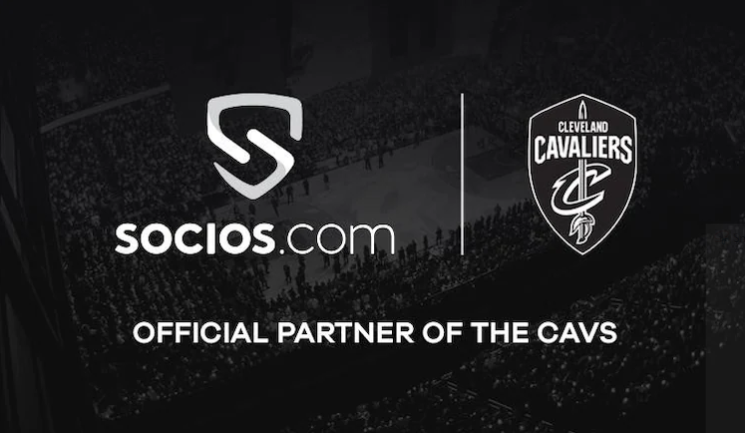 The Cleveland Cavaliers and Socios.com, the leading global blockchain provider for the sports and entertainment industry, announced an official team partnership.

While the direct, team-based fan engagement elements and activations alongside Socios.com are still in the review and development phase, the initial components of the partnership will focus on creating awareness and branding with Socios.com through the Cavaliers global asset platform.

Beginning with the upcoming 2021-22 season, the Socios.com logo will be on the abdomen of the Cavs practice jersey just below the player’s number. In addition, the blockchain provider will have brand presence in-venue with broadcast-visible LED courtside signage. They will also have the ability to use the Cavs marks and logos in their global marketing efforts outside the United States and Canada. Socios.com is the first Cavaliers partner to leverage this unique branding opportunity under the NBA’s International Team Marketing Program.

Driven by the central belief that transitioning passive fans into active fans is essential to the future of sport, Socios.com is a direct-to-consumer (D2C) platform that leverages blockchain technology to provide the world’s leading sporting organizations with the tools to engage with and monetize their global fanbases.

The partnership between the Cavs and SSocios.com adds another layer to the team’s continued ideation around blockchain technology and its current and future applications. Earlier this month, the team launched an NFT Art Collection that features basketball-centric works created by independent artists. The Collection is displayed in an online gallery and showcased physically on massive LEDs at Rocket Mortgage FieldHouse, the Cavs’ home, as part of the venue’s standing Public Art Program. The team also recently partnered with technology company, RECUR, to mint its first-ever NFT titled the Cleveland Cavaliers Locker Room. Over fifty of these inaugural NFTs were gifted to corporate partners at a special “Art of Business” private event. Future announcements are coming soon about how fans of the team can score their very own Cavaliers NFT ahead of the upcoming 2021-22 season.

“This partnership with Socios.com is another significant step forward as part of our on-going exploration into blockchain technology and how it can be utilized within our business to grow and enhance fan engagement,” said Mike Conley, Cavaliers and Rocket Mortgage FieldHouse SVP & Chief Information Officer. “We share with Socios.com a mutual passion and drive for innovation and we are excited about the opportunities this relationship will bring as it continues to evolve into the future.”

“Socios.com is fast developing into a global fan engagement powerhouse, where passive fans are being transitioned into real players in the day-to-day activities of their favourite teams.

“This is the start of an exciting partnership that we believe can eventually lead to greatly enhanced fan engagement for fans of the Cavaliers around the world.”

A rapidly expanding 40+ strong roster of leading sporting organizations have partnered with Socios.com to launch Fan Tokens on Socios.com, allowing their global followings to enjoy an enhanced fan experience and become part of a vibrant worldwide digital community of supporters.