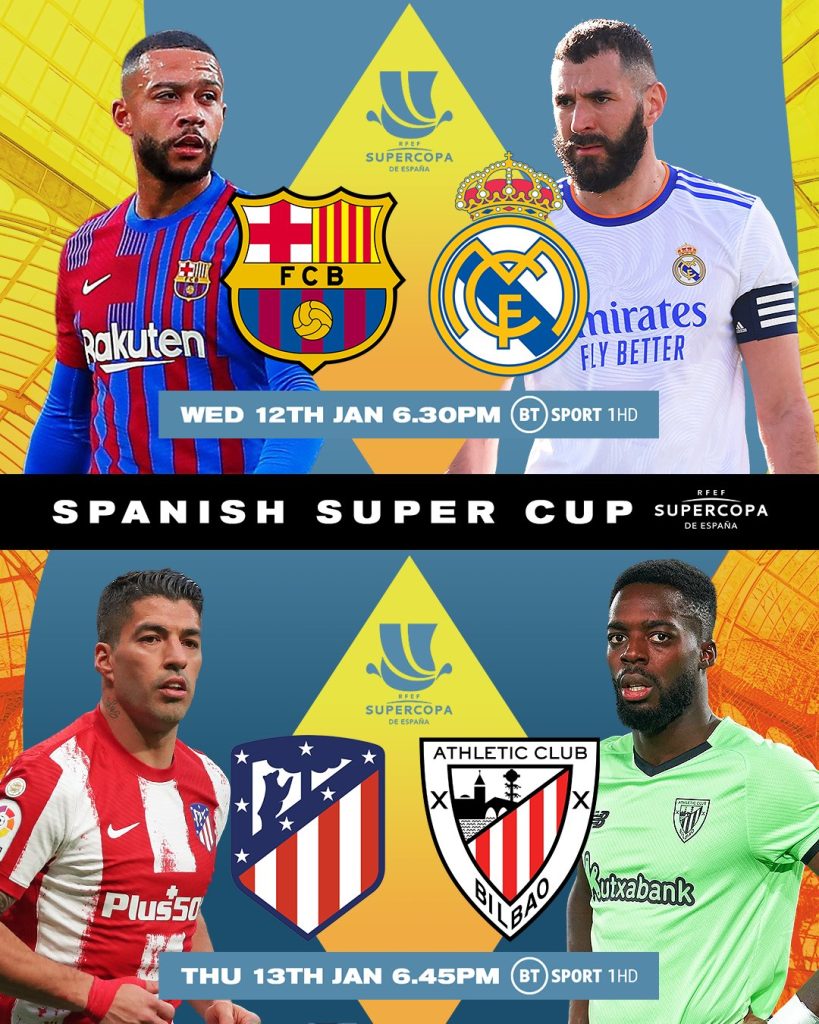 This season marks the third edition of the Spanish Super Cup in the new format of four teams, with BT Sport broadcasting all four games live and exclusive from King Abdullah Sports City in Jeddah, Saudi Arabia. Athletic Bilbao (also referred to as Athletic Club) enter the tournament as the current holders of the trophy after beating 13-time winners, Barcelona 3-2 AET in a dramatic Spanish Super Cup 2020-21 final which saw the competition’s all-time leading scorer, Lionel Messi receive the first red card of his career with the Catalans.

The first semi-final will be an enticing El Clasico between last year’s La Liga runners-up, Real Madrid and Copa del Rey winners, Barcelona, live from 6.30pm on BT Sport 1 on 12th January (7pm kick off). The Catalans will be looking to make up for last year’s final defeat at the expense of their old adversaries, Los Blancos who currently sit at the top of La Liga and claimed the bragging rights over their rivals with a 2-1 victory in the league earlier in the season.

This is followed by the second semi-final between reigning La Liga champions, Atletico Madrid and Copa del Rey runners-up, Athletic Club. Diego Simeone’s side haven’t lifted the trophy since 2014 and will have their sights set on clinching their third piece of silverware in the competition, while Bilbao will be hoping to be the first club to secure consecutive titles in the Supercopa de España since Barcelona in 2010. Coverage of this clash gets underway from 6.45pm on BT Sport 1 on 13th January (7pm kick off).

The winners of each semi-final will go head-to-head in the Spanish Super Cup final on 16th January which will be broadcast live and exclusive on BT Sport 3 from 6pm.