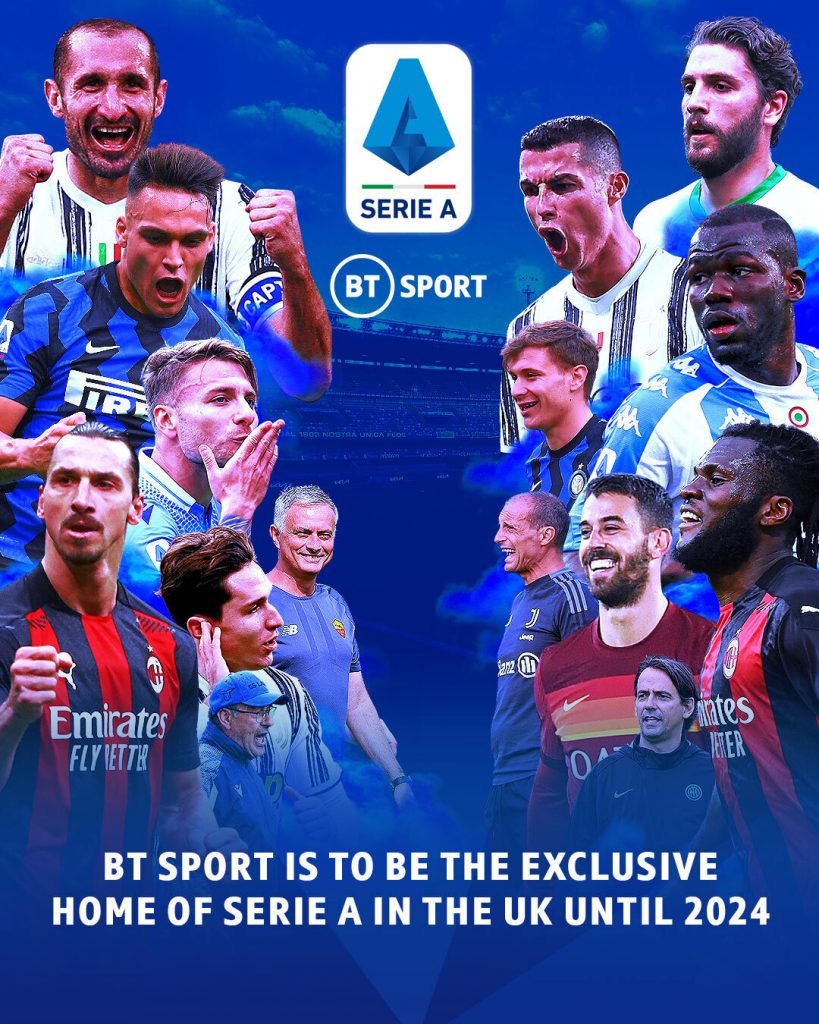 BT Sport To Broadcast Italy’s Serie A Until 2024

BT Sport is to be the exclusive broadcaster of Serie A in the UK and Ireland in a three-season deal agreed with Infront, the league’s exclusive international media rights partner, running through to 2024.

Featuring some of the biggest names in world football, Serie A players include Juventus stars Cristiano Ronaldo and Aaron Ramsey, Milan’s Ibrahimovic plus Napoli’s Kalidou Koulibaly. The dugouts will also feature a number of familiar faces, with Jose Mourinho returning to the league to manage AS Roma and Massimiliano Allegri returning to Juventus to try and repeat the success he enjoyed during his first spell with the club. BT Sport customers will also get to follow members of Italy’s UEFA Euro 2020-winning side including Juventus striker Federico Chiesa, Napoli’s Lorenzo Insigne and Lazio’s Ciro Immobile.

Serie A on BT Sport kicks off on August 21 and every single match will be broadcast, with at least five live games shown each round, totaling around 200 live matches across the season.  James Richardson will host a weekend Serie A show featuring key live games and a look across all the action from the league.

Next season is poised to renew last season’s battle between both Milan clubs for the Scudetto, with Inter Milan finishing first and AC Milan second last May. Juventus, who had won the previous nine championships prior to last season, will be targeting a return to winning ways after they finished in the top four by a single point in 20/21. Meanwhile, storied Italian clubs Napoli, Lazio, AS Roma and Sampdoria will be seeking improvements on their final league positions last season.

Rachel Knight, Sports Rights Director, BT Sport said: “We want to provide our customers with the best sport from across the world and the addition of Serie A means viewers will get to follow some of the biggest stars, managers and clubs in world football. European football has always been an important part of our line up, with Serie A now joining our exclusive coverage of the UEFA Champions League, UEFA Europa League and UEFA Europa Conference League, alongside France’s Ligue 1.”