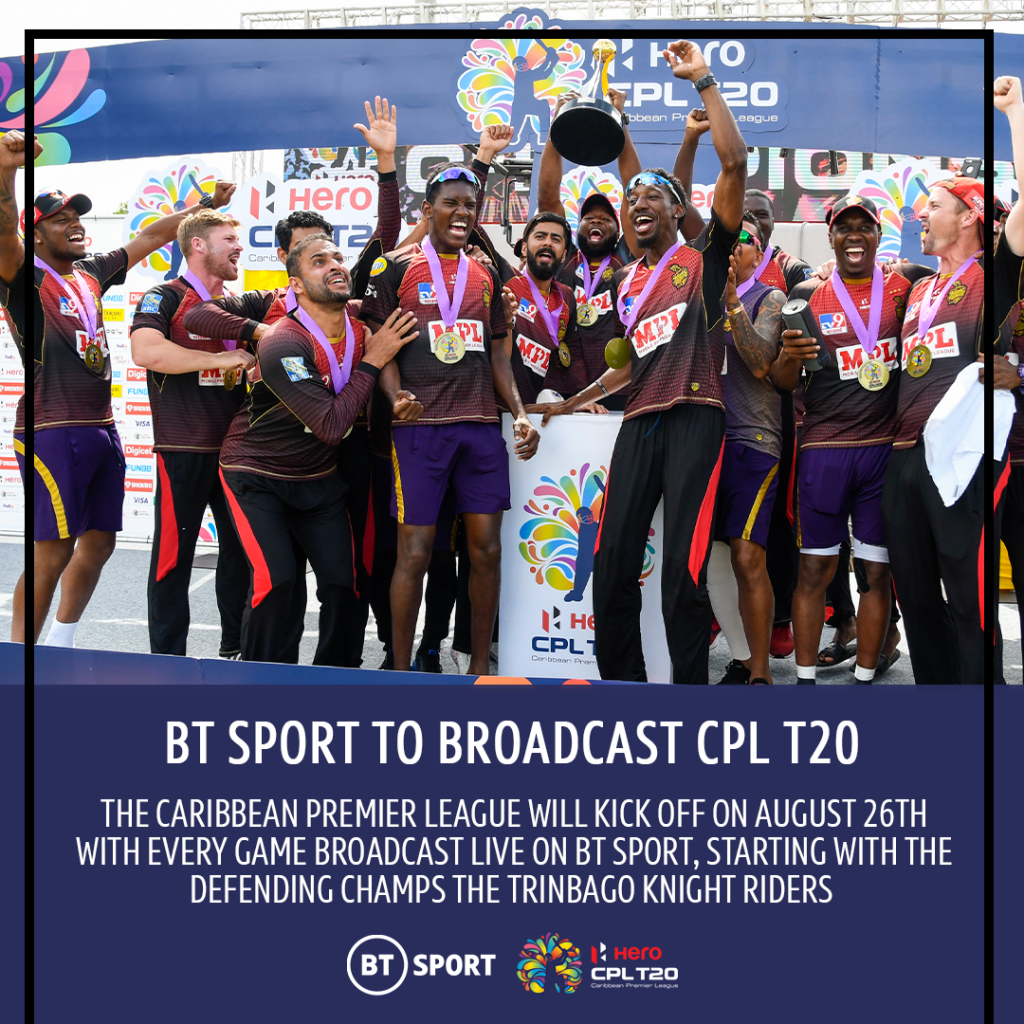 BT Sport has secured a multi-year agreement to broadcast every ball of the 2021 Hero Caribbean Premier League.

The three-week tournament which kicks off on 26 August, will see West Indies stars including Chris Gayle, Nicholas Pooran and Kieron Pollard, face off against each other.

The broadcast adds to BT Sport’s multi-year agreement to broadcast all domestic and international cricket from the West Indies, which has already seen South Africa, Australia and Pakistan tour the Caribbean this summer.

Rachel Knight, director of sports rights, BT Sport, said: “BT Sport’s cricket line-up continues to grow as we show more world-class cricket to fans across the UK. The Caribbean Premier League will kick off an exciting period for cricket lovers on BT Sport which in early 2022 includes exclusively live coverage of England’s tour of the West Indies.”

BT Sport have also agreed a partnership with Super League Triathlon which will see the entire 2021 Championship Series broadcast live on BT Sport, on demand via its App, as well as highlights.

Super League’s Championship Series will feature four back-to-back races throughout September with events in London, Munich, Jersey and Malibu and will crown the fastest triathletes in the world with short, sharp and action packed events in a made for broadcast package that will thrill fans around the world.

The 2021 Championship Series also sees the addition of SLT Teams – a new team franchise concept that will deliver more tactics and dynamics, ensure the racing remains constantly high octane and create further spectator engagement in a way the sport has never seen before. BT Sport will show the Championship Series live in the UK, with additional highlight programmes from each event.

Joe Edwards, Chief Marketing Officer at Super League Triathlon, said: “Super League Triathlon’s 2021 Championship Series is set to raise the bar for short course triathlon with the best athletes in the world competing in thrilling formats for a prize purse of $1.25m. SLT Teams is the next step in Super League’s vision to grow triathlon into a sustainable spectator sport and BT Sport is perfectly placed to help showcase these brilliant events to audiences in the UK.

Rachel Knight, director of sports rights, BT Sport, said: “Our customers can look forward to the very best action from one of the world’s most grueling sports series, with Great Britain’s Jonny Brownlee set to compete. BT Sport will be bringing viewers coverage from a range of triathlon events in due course.”