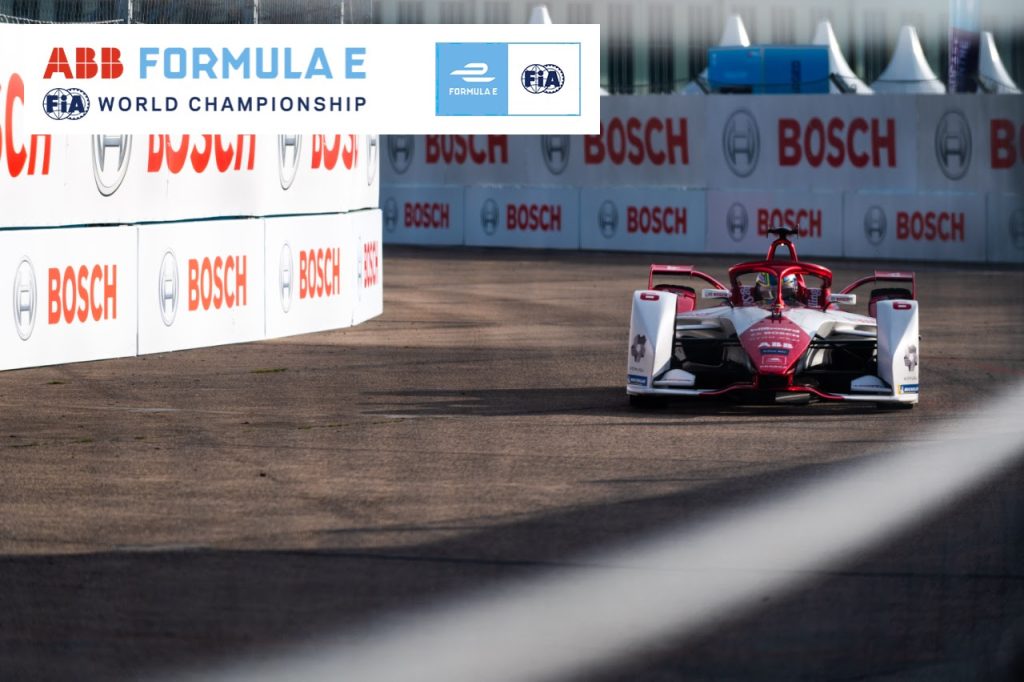 Having worked closely with Formula E since first announcing their partnership in Season 4, Bosch has committed to sharing its expertise as an Official Partner of the ABB FIA Formula E World Championship through Season 10. With a common goal to drive forward electromobility, Bosch and Formula E make natural partners in progressing innovation in electromobility and race-to-road EV technology.

With Formula E entering the Gen3 era from Season 9, Bosch will work with the ABB FIA Formula E World Championship as its more powerful and lighter cars race on city streets around the world, increasing the highly competitive, dramatic racing that fans associate with Formula E.

Bosch’s industry-leading software and hardware promotes innovation in all forms of e-mobility, in particular through a tailor-made vehicle management system as demonstrated in their relationship with DRAGON / PENSKE AUTOSPORT. The combined focus on technology and delivering sustainable mobility makes the partnership between Formula E and Bosch the kind of authentic, integrated collaboration the Championship prides itself on.

Jamie Reigle, Chief Executive Officer, Formula E, said: “Each of our partners has a true, integrated alignment to our common mission and Bosch’s leading role in accelerating the global electromobility agenda makes them the perfect partner for the ABB FIA Formula E World Championship. Bosch has committed to advancing electromobility through integrated technology and marketing initiatives and we are delighted they will continue to showcase their innovations in cities around the world in partnership with Formula E.”

Dr. Markus Heyn, Member of Bosch’s Board of Management, said: “Electromobility is establishing itself as a core area of business for Bosch. Electric cars with our components can by now be found on roads around the world. By continuing in our role as official sponsor of Formula E and supplier of tried-and-tested motor racing technology to the first purely electric racing series, we’re demonstrating that we’re the number-one partner for electric driving.”

The championship has also announced their growth results from season seven, with its live television audience growing globally through Season 7 to record-breaking levels, recovering strongly from the pandemic-hit previous season.

By the dramatic conclusion of Formula E’s first-ever World Championship season which was won by Mercedes-EQ’s Nyck de Vries in the final E-Prix of Season 7 on August 15 in Berlin, the live television audience made up the majority of Formula E TV viewers (62%) for the first time in the Championship’s history.

The ABB FIA Formula E World Championship increased its cumulative audience to 316m – a 32% year-on-year growth – driven by new distribution agreements with free-to-air (FTA) channels in key markets, which also lifted Season 7’s live audience above pre-pandemic levels underscoring the organic growth in fan interest in electric open wheel racing. This was achieved despite a shorter calendar and a lack of races in Asia.

After Season 6 was cut short due to COVID-19 and wrapped up via six races in nine days in Berlin, Season 7 saw the Championship return to iconic global cities including Rome, New York and London with 15 races in eight locations. A combination of improved broadcast content and alignment on start times with broadcasters to optimise live audience and channel share contributed to +26% increase in the average viewing duration per live race.

– USA’s cumulative audience growth of +25% YOY was positively impacted by two races, including the New York E-Prix, airing on the main CBS network.

– Indonesia’s Formula E audience exploded with a 147% increase on Season 6 on its free-to-air TVRI channel.

These numbers were also reflected in the percentage of viewers watching race programming live rather than highlights or repeats. Fans in Germany (730% increase), Italy (+234%), France (+232%), UK (+164%) and Indonesia (+92%) were all far more likely to tune in to watch the 24-driver grid compete live.

Reigle said: “This was a record-breaking year for Formula E as we worked with our teams, media partners and sponsors to deliver a fan-first strategy emphasising live race audience development and direct engagement on our digital platforms. It’s clear there is strong fan interest in Formula E’s electric racing in cities and we are delighted to see our strategy of partnering with broadcasters committed to localised, engaging and accessible free-to-air coverage paying off. We are set for a fantastic Season 8 as we welcome back fans at our races in some of the most iconic city locations in the world. We are focused on strengthening our broadcaster footprint and relationships, increasing our global audiences and delivering an integrated media platform to serve our fans and support our continued growth.”

Season 8 of the ABB FIA Formula E World Championship will begin on January 28, 2022 for its biggest season ever with 16 races in 12 world locations.