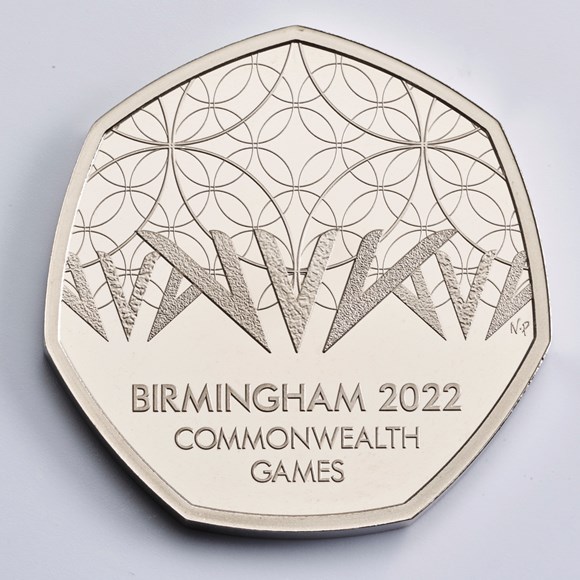 Birmingham 2022 and CGF Partnerships have signed a licensing deal with The Royal Mint and Royal Mail to produce commemorative coins and stamps to mark the Birmingham 2022 Commonwealth Games.

Birmingham 2022 marks the third time the Games have been hosted in England in its ninety-two year history, and each of those Games have been commemorated through the release of collectable Royal Mail stamps and Royal Mint coins, anchoring this significant event in history and contributing to the celebration of the Commonwealth Games.

Both The Royal Mint and Royal Mail have been awarded exclusive rights as Official Licensees to create a series of Birmingham 2022 themed coins and stamps to celebrate and mark the global sports event, which takes place from 28 July to 8 August.

The special 50 pence piece takes inspiration from Birmingham’s bedrock of innovation, creativity and architecture. Designed by Natasha Preece of the Royal Mint, the coin features the iconic design of the Library of Birmingham. It was released as part of the Royal Mint’s 2022 Annual Sets on 4 January 2022, which includes a coin designed in celebration of Her Majesty the Queen’s Platinum Jubilee.

The Birmingham 2022 collection features one main coin design, offered in a range of precious metals and will also include base metal designs featuring England, Wales, Scotland and Northern Ireland coins and a Home Nations set.

Royal Mail has a rich history of issuing stamps to mark the Commonwealth Games being held in the UK. The Company has commemorated the British Empire Games 1925, Cardiff 1958, Edinburgh 1970, Edinburgh 1986, Manchester 2002 and most recently, Glasgow 2014 with Special Stamps as lasting souvenirs of the event for collectors and fans.Details and images of the Special Stamps being issued by Royal Mail will be announced closer to the launch of the Games in July.

“These very special coins and stamps will be a perfect reminder of the excitement and thrill people will have by being part of Birmingham 2022. Both the Royal Mint and Royal Mail are organisations who have excellent international reputations, and the partnerships are a perfect fit for our incredible global event. The commemorative sets are a wonderful way to celebrate the Games and for the whole country to get involved in Birmingham 2022 and our festival of sport and culture!”

“For over 1,100 years, The Royal Mint has been producing British coins that have recorded the passing of history and major events. We are thrilled to be able to show our support for the Birmingham 2022 Commonwealth Games and have the opportunity to celebrate this exciting event on a commemorative coin.”

“We are very proud that the CGF and Birmingham 2022 will be working with the Royal Mint and Royal Mail to produce these special coins and stamps. It is a great way to mark the occasion, with the Games returning to England and hosted in Birmingham and the West Midlands for the first time. The commemorative sets will be a fantastic way to celebrate the Games and allows everyone to get involved in all the celebrations.”Both the commemorative coins and stamps will be available to buy in July, from post offices, the official Birmingham 2022 retail stores and online