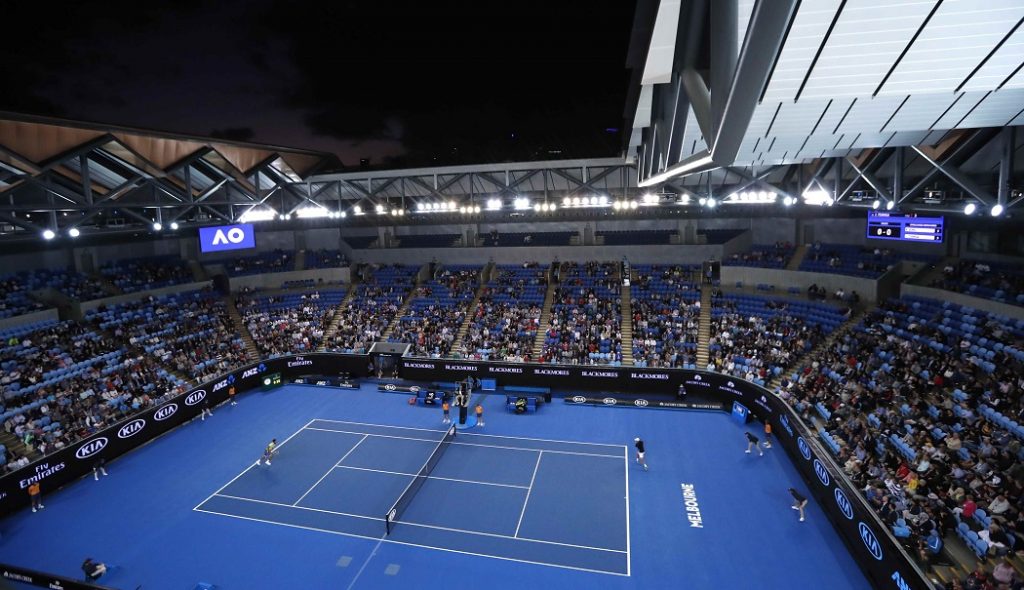 Olympic Games and major events consultant Michael Pirrie, looks at how the Australian Open tennis grand slam has recovered and re-positioned after the Novak Djokovic deportation crisis and Russia’s war on Ukraine.

While the heat, controversy and impact of Qatar’s Football World Cup and towering final may still be settling, the new-year in sport has commenced already with fresh controversy amid the heat of the Australian summer.

Ignited by familiar geopolitical tensions that shaped much international sport over the past 12 months, diplomatic drama gripped the Australia Open on day one of the grand slam showpiece, the biggest sporting event in the world this month.

While an extreme heat break was called on outside courts for player safety, it was the presence of a Russian flag in the stands that sent spectator and political temperatures soaring.

The flag complaints and condemnation transformed court settings into a new year cauldron of controversy.

Anger at the Russian display of pride boiled over, forcing organisers to immediately ban Russian and Belarusian flags and triggering the biggest international incident in tennis since the players ban at Wimbledon.

While the flag fury was predictable – Australian is helping to train Ukraine forces –  the incident was another flashpoint in a new multi crisis world impacting sport in myriad ways.

This is becoming sport’s new normal.

The flag furore followed the Novak Djokovic visa crisis a year ago, which exploded into an international incident on the eve of the Australian Open, prompting high level diplomatic discussions between Australian and Serbian officials.

The incident – which saw the unvaccinated sport star challenge Australia’s Covid public health regulations – generated political and public anger towards event organisers as well as Djokovic for failing to follow pandemic protocols and embarrassing a sports proud host nation on the world stage.

This resulted in Djokovic’s infamous deportation;  the high profile vaccine opponent passing hospitals stretched to capacity with severely ill unvaccinated patients as he travelled through the host city where he has had most grand slam success to catch a flight back home – one of modern sport’s most surreal journeys.

This has focussed on managing the high cost and risk involved in staging major events in a poly crisis world, while highlighting the relevance of the Australian Open in local and international communities and markets.

These outcomes, which may be reassuring also for other national and world governing bodies, include:

–  A new domestic broadcast deal with a national network worth $500 million in cash, advertising and other services.

– Money-making deals with international broadcasters such as ESPN, Eurosport and affiliates to generate interest and grow revenue in sports tourism from China, India and other key markets.

These deals, along with other new sponsorships, mean more money will come into tennis than before Covid.

The business strategy for governing bodies moving forward must focus on future proofing finances in order to cover disruption to major sporting events as much as possible, underlined by the toll of the pandemic.

This includes lost revenue of approximately $100 million in 2021 and savings spent on biosecurity measures and services to keep the Australian Open tournament operating at the height of the pandemic.

While Djokovic has returned – still unvaccinated – following the removal of Covid restrictions, organisers have attempted to move on, echoing the position of the Premier of the grand slam host state of Victoria, Dan Andrews, who famously declared “that (the) tournament is a lot bigger than any one person…”

Organisers have better communicated, marketed and promoted a wider vision for the grand slam event beyond the controversial Serbian tennis star who has divided public and player opinion.

“No one really thought they could come to Australia unvaccinated and not having to follow the protocols,” leading tennis player Stephanos Tsitsipas said last year as the Djokovic drama unfolded.

“…it takes a lot of daring to do (that) and putting the grand slam at risk, which I don’t think many players would do.”

Tournament relations and goals have been reinforced and realigned around the interests of key stakeholders – especially the public and state government, which has spent $1billion redeveloping the Melbourne Park site of the event over the past decade

This include Australia’s First Nations people, and a program at the mega tennis event devoted to young indigenous youth, who often come from disadvantaged backgrounds.

“We use tennis as a vehicle to create better education and health…and to grow as people,” said Goolagong Cawley, the first woman in the modern era to win Wimbledon as a mother

Greater awareness of the tennis skills and opportunities for hearing impaired and blind players has also been generated through the Australian Open, further extending the reach and relevance of the sport in the wider community.

The Melbourne Australian Open has also hosted programs have highlighted the relevance of tennis to more distant audiences across Australian and worldwide, including the Tennis Plays for Peace charity initiative.

The support for the Russian flag ban at the Australian Open, and in nations beyond, also reflects growing global turbulence and uncertainty impacting sport and organisers.

This may influence locations and nations involved in international sport.

Cricket Australia recently withdrew from a series in Afghanistan following further restrictions by the Taliban on women’s and girl’s education and employment.

The Russia flag ban will remain in place for the remainder of the Australian Open, strongly endorsed by the local state government.

“This is the right move. This is a good move from Tennis Australia,” the acting Victorian Premier, Jacinta Allen said.

The state government deputy leader said the ban “sends a very clear message that human rights is important, whether it’s in sport or more broadly in our community.”

While the Russian embassy has been highly critical, there is growing pressure on the IOC to also ban the Russian flag – and teams – from the Paris Olympic Games next year.

The growing range of sports related measures against Russia has pushed the super power to the furthest extremities of international sport since World Athletics banned members of Russian track and field from the 2016 Rio Games.

This followed the discovery of secretive state sponsored doping in the rogue nation’s sports systems.

The Australia Open’s revival following Djokovic’s deportation and bans on Russian flags and teams following the Ukraine invasion show more than ever no individual or country is bigger than sport.

The House View – The PIF’s plans to purchase WWE

Member Insights: Sport is better when it reflects the real world