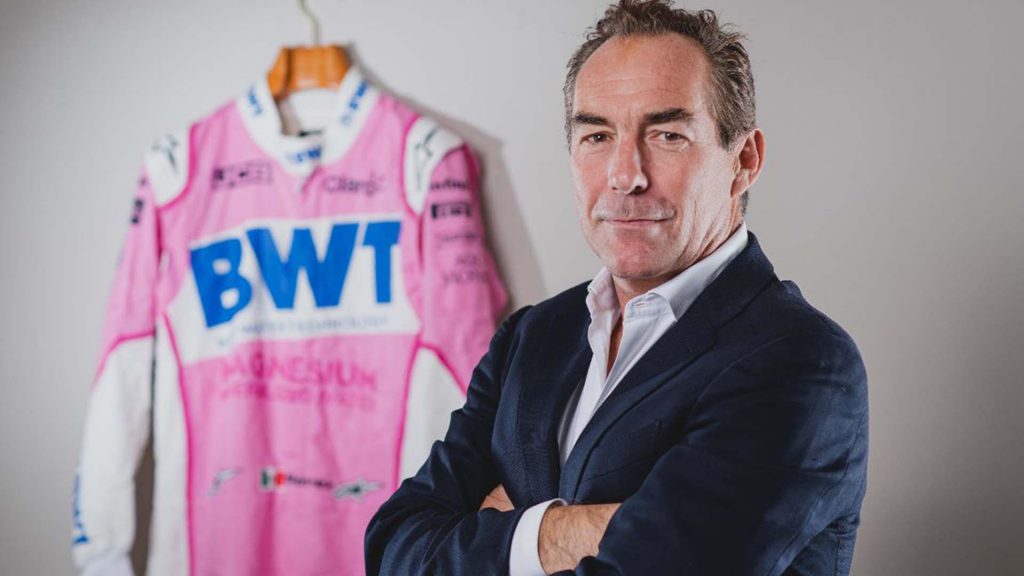 “As We Develop Ways Of Moving Beyond Long-Form Linear Content, The Core Product Will Become More Valuable”

The new Formula 1 season is almost upon, with competitive racing back underway this weekend, as Bahrain hosts the opening race in the 2021 F1 calendar. Ahead of this, iSPORTCONNECT will be running some special interviews this week before lights out on Sunday.

To kick off the week we begin with Jefferson Slack, Managing Director of Commercial & Marketing at Aston Martin Cognizant F1 Team. Jeff spoke to our very own Jay Stuart as part of a new series of ‘In Conversation With…’, looking at his personal entry to F1 this year and what it means to have the Aston Martin brand back in the sport.

The last time Aston Martin took part in Formula 1 was so long ago James Bond had not yet climbed behind the wheel of the car he made famous in Goldfinger. Sixty years later in Bahrain next weekend the new Aston Martin Cognizant team will start the Grand Prix with four-time world champion Sebastian Vettel joining Lance Stroll on the grid.

The latter is the son of none other than Lawrence Stroll, the billionaire chairman of Aston Martin Lagonda Global Holdings, the LSE-listed group that is jumping back into the racing game with its own Silverstone-based works team after a run as technical partner of the successful Red Bull team. The new team is actually a rebranding of Stroll’s Racing Point team, which competed in F1 for the past two seasons.

“Lawrence Stroll is a visionary. He understands both sides of the equation, the iconic luxury automobile brand and Formula 1.”

“It is an enormous leap,” says Jefferson Slack, the Managing Director of Commercial & Marketing at the Aston Martin Cognizant Team. “Lawrence Stroll is a visionary. He understands both sides of the equation, the iconic luxury automobile brand and Formula 1. This is the best activation ever undertaken by a car manufacturer. It’s a classic case of 1+1 = 3.”

Bear in mind that the ‘luxury’ identity of Aston Martin as an independent manufacturer changes the arithmetic from the start. If F1 gets only two of three thousand potential customers to the new team’s races during the season, that’s half the car the company sells in a year. And making dealers feel a part of the F1 adventure is very much part of the agenda.

You might think that this is also a big jump for Jeff, an American whose career has included four years as CEO of Inter Milan and senior roles at agencies like IMG and Wasserman. But not so much, he says.

“What makes F1 different is the scale of the market and the collaboration. It’s global and we travel around together.”

“My outlook has always been about trying to bring the best learnings from the U.S. to the international stage. They are different on the surface, one’s built around leagues and the other around federations, but underneath the models are usually pretty much the same. There is a central organising body, in the case of F1 there are two with the FIA and FOM. And we have ten entities with their own self-interests competing to win. That’s just like football with a league and the competing teams in it.”

“What makes F1 different is the scale of the market and the collaboration. It’s global and we travel around together.”

And when it comes to control, there’s an important difference in the media rights. “We have fewer rights than a football team. TV and highlights are controlled by FOM. That means a team needs to be pro-active and creative about the content it uses to engage fans.” Aston Martin Cognizant already has 10 people working full time on that content creation.

Building a fan base is a fundamental aim of the F1 investment. “We have a clear objective of getting people to register,” Jeff says. Again, the luxury profile fits the strategy. If you can get only 0.5% of the fans interested in buying an Aston Martin, you’re sitting pretty.

At a time when the sports business is so focused on building data assets, Jeff sees the building of a fan community as the primary objective. “The big platforms are dominant when it comes to data. We know that we will not have direct access to all our fans or be able to monetize them directly, but it’s still a community, a fan base. At the end of the day what makes the Dallas Cowboys or Manchester United so valuable is the size of their fan bases. That’s what underpins the valuations.”

And what about the future of digital? Will rights owners like football clubs and F1 teams have significantly more direct access to data and monetization opportunities via their own in-house digital assets?

Jeff doubts that a big shift is coming. “It’s basically game over. The big platforms have the power. It’s their sandbox. We have to work with that.”

Aston Martin has its own mega-partner from the world of technology in U.S. multi-national Cognizant (2020 revenues of approx. $17 billion and 300,000 employees worldwide). “They know technology and they give us a capability that we could never have on our own to make us go faster.”

And there’s a marketing dimension too. With its global reach, Cognizant is already driving traffic on social and they will put television advertising behind the F1 team too.

“As we develop ways of moving beyond long-form linear content, the core product will become more valuable.”

Television remains as fundamental for F1 as it is for other major sports properties. F1 has been a bit more focused on staying ahead of the curve than most, pushing into innovative ways of producing broadcast content that speaks to fans directly with new camera tech and personalization options. And innovation will become ever more important.

“The big opportunity in television is in finding new ways to engage,” Jeff says. “The possibilities are huge. As we develop ways of moving beyond long-form linear content, the core product will become more valuable. Every time people say the value of rights will go down, they don’t. I think the value will continue to grow. But you can’t just keep doing what you’re doing.”

As for the first season on the track, Jeff sees a more competitive picture with FOM putting a cost cap in place for the first time in a series where resources tend to translate into results a bit more predictably than in other sports.

But he is realistic about the results to expect. “The Formula 1 championship has been won by the same team (Mercedes) seven years in a row. It’s not that different from football in the big European leagues. We’re probably fighting for third place overall (behind Mercedes and Red Bull). It’s not realistic to think we will win the championship this season.  But we hope to win races and compete for the championship in the future.”

Lance Stroll took first for Racing Point in Bahrain last year so the new team might get off to a rip-roaring start. Regardless of what happens next Sunday and in the 22 other races this season, for the Aston Martin brand, the new F1 campaign looks like a sure winner.