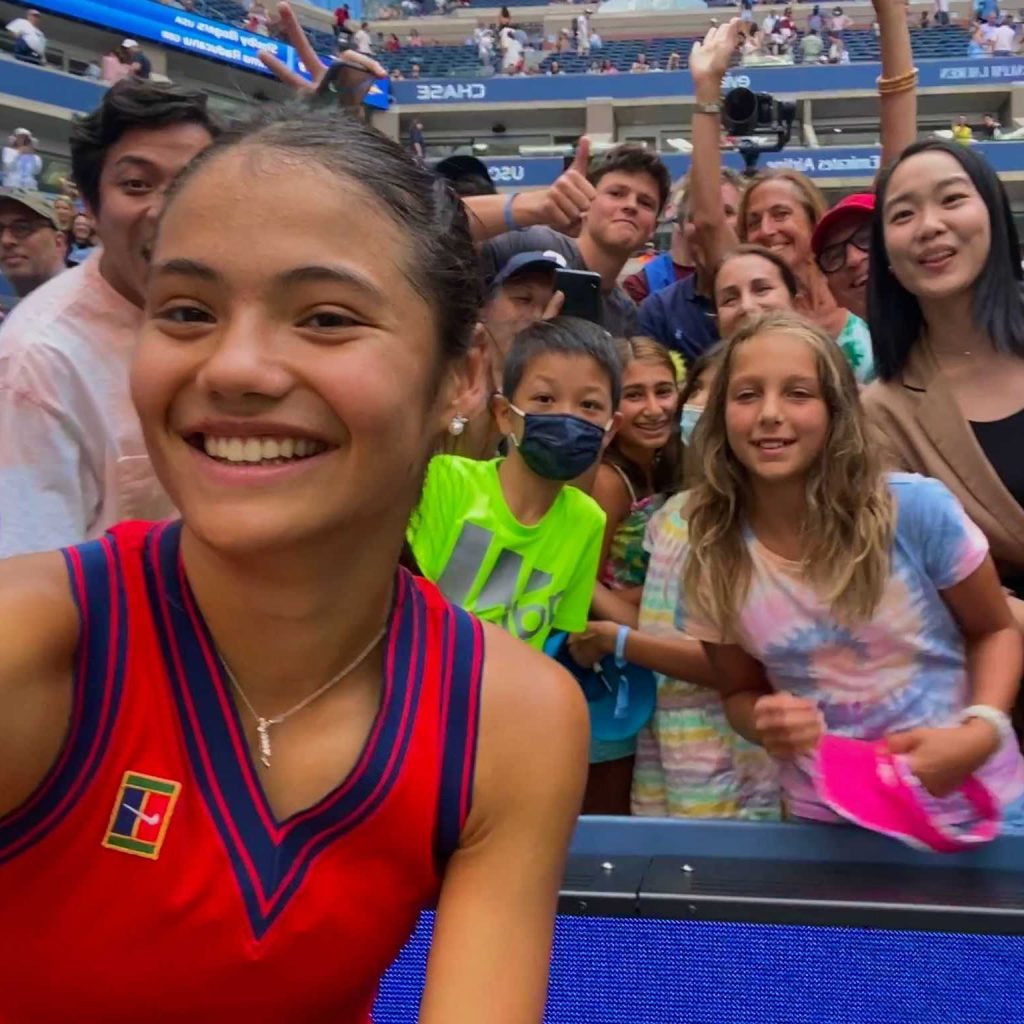 Emma Raducanu pulled off one of the most incredible sporting victories of all time in September when she stormed to the US Open title at Flushing Meadows without dropping a set a wildcard entry to the tournament.

Due to her wildcard status, the 19-year-old (then 18) was forced to go through four qualifying rounds in the week before the two-week main tournament even began.

Her instantaneous rise was remarkable. She had shown flashes of brilliance during her run to the fourth round at Wimbledon earlier in the summer, but the strength of her tennis had ascended to a different level by the time the final grand slam of the year came around.

“From her US Open win alone, she gained 1.9 million followers across her social media channels.”

This has led to many discussing her huge potential to become a superstar both within the sport itself, but also within marketing, as she is set to become one of the most marketable athletes in the world and the focus of many sponsorships by major brands.

As a British star she will obviously become the immediate homegrown British hope for Wimbledon, since Andy Murray is coming to the twilight of his career following a spate of injuries, and she will likely become the face of the tournament and be its central focus for many broadcasters.

But her US Open win has catapulted her to stardom not just in the UK, but across the globe. With this she is aided by her Romanian and Chinese heritage, giving people in those countries a closer bond to her. In fact, a notable video on social media following the US Open final came when she thanked her fans in China in fluent mandarin, which is likely to have grown her base in the country a huge amount.

And when it comes to social media, some of the numbers around Raducanu are stratospheric when they are compared with some of the sport’s other stars.

From her US Open win alone, she gained 1.9 million followers across her social media channels, according to statistics collated by Hookit.

To put this into perspective, she gained more than double the amount of followers that Naomi Osaka has added for each of her four grand slam victories (Osaka’s total follower count currently sits at just over five million – with around four million of that number coming in the three years since her first US Open win in September 2018).

If you compare this to the men’s side of the game, with two younger stars winning the US Open in both 2020 and 2021, it also dwarfs their similar victories comprehensively.

These numbers also mean that she has now been propelled into the top-ten female tennis players in terms of largest social media following.

This, along with her newfound fame, has made Raducanu a key focus for brands as they look to utilise both her current popularity in the immediate future, but also for others pursuing long-term deals due to the potential of a lengthy career ahead of her. And the more successful she is on the court during that time will of course increase the value of these deals, get in now and you could be looking at something which rises dramatically over the years.

“In the past three months since August, Emma has become the leading women’s tennis player by sponsorship value AAV generated, creating 11x more value for brand sponsors than she did in the first seven months of the year combined,” says Roger Breum, Marketing Director at Hookit.

“If she is able to continue winning on the court and keep the engagement rate up with her massive new following, Raducanu has the potential to be the #1 female athlete on social media in 2022 and beyond.”

Already in recent weeks Raducanu has signed a deal to become a brand ambassador for French fashion giant Dior, which adds to a deal signed in late September with Tiffany and Co, reported to be worth £2 million.

These staggering fees for the 19-year-old indicate just how powerful a marketing tool they believe she can be in the coming years, and it is likely this is just the tip of the iceberg with many more deals to come.

Her current deals with Nike and Wilson, who she used during the US Open, are rolling one-year contract deals, and there will be a lot of interest in how much those potential deals go for on a more long-term basis and whether other brands try to offer higher figures.

It has been seen with sports stars across a variety of sports that an initial high point immediately in their career can be difficult to follow up from, and these deals will provide more off-court distractions for Raducanu.

“Now it is about capitalising on her full potential and, if she does so, she will undoubtedly become one of the biggest names in the world of sport.”

Both she and her inner team will try to ensure she stays grounded and is able to continue improving on the court and not suffer the same fate as other precocious stars who have had strong careers without making the most of their full potential.

Having watched her speak in numerous interviews, it seems unlikely that she will succumb to similar circumstances, as the youngster appears to have a very mature head on her young shoulders.

Now it is about capitalising on her full potential and, if she does so, she will undoubtedly become one of the biggest names in the world of sport and the globe’s ‘most-wanted’ sportswoman from a brand perspective.